Happy second day of the year! I have had a very busy few days full of deliciousness, so I am just having time to sit down to write. I have loved being back in DC to visit with my friends, but I am now ready to go home and get back to work. I have so much hope for what lies ahead in my year. I sure did find a great way to end 2019 though.

For the fourth year in a row, Chris, Andrew, and I co-hosted a New Year’s Eve party. They handle the alcohol, while I make the food. We had three successful parties under our belts, but I felt extra pressure this year because of having just completed the Culinary Arts certificate. My friends have always enjoyed the food I make, but I wanted to showcase the new skills I learned.

I crafted a fun but sophisticated menu perfect for a New Year’s Eve party. I do believe my training was evident in the final presentation. This includes how I had everything cooked and plated by the time our first guests arrived (not including our out of town friends who arrived earlier in the afternoon). In years past, I was frantically trying to finish cooking even as guests were piling in the apartment. This year, we managed to have all the dishes cleaned up before the party began. I have learned so much about time management and being efficient in the kitchen. It’s all about working with a sense of urgency.

I am pleased with how everything turned out in the end. There was one item where I was getting frustrated with my execution, and that was the cranberry sage pork dumplings. I wrote about struggling with dumpling making in one of my class recap posts. I decided to challenge myself to put these dumplings on the menu because they are so good. I was getting mad that I hadn’t already mastered this skill on my second attempt. That is my perfectionism getting in the way. I was struggling with the stickiness of my dumpling dough. I had trouble stuffing and folding the dumplings. I kept calling them the ugly dumplings. Yet, when I cooked them, I actually like the way they looked, aside from the varying sizes. It really was a pretty good second attempt. I need to give myself more slack during the learning process.

I then made two batches of homemade puff pastry. I took the first batch and made pigs in a blanket. I rolled out the puff pastry and cut it into strips and rolled them around some little smokies. Baked off, the puff pastry rises a bit and forms these flaky layers of pastry around the mini sausages. I served these with a honey mustard aioli that Chris and Andrew brought home from Christmas.

The second batch of puff pastry was for some cheese straws. I saw a recipe on NYT Food for pimenton cheese straws. The recipe called for parmesan cheese, but I knew I would have some leftover gruyere cheese, so I went with that. These straws were made my rolling the puff pastry out over the grated cheese, incorporating it into the dough. When I cut and twisted the straws, you couldn’t tell there was cheese in the dough. I sprinkled the straws with some pimenton and baked them off until they were golden brown. I just couldn’t resist serving these “straws” in a cup, so I grabbed a couple pint glasses to display them. When you bite into these straws, they are so obviously flavored by the cheese. They were cheesy and flaky, a wonderful treat in my mind. I would absolutely make them again. 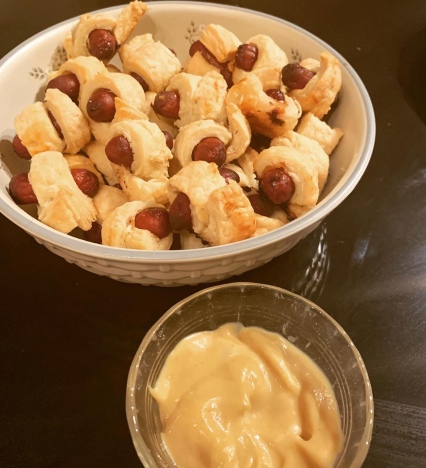 If making two batches of puff pastry weren’t enough, I also made two different preparations of pate a choux. One of those was a savory dish called gougeres. These are little savory profiteroles with bacon, gruyere, and thyme. We made these in our pate a choux class, and I thought they’d be a nice addition to the party. I used a star tip for a more fun shaped pastry. 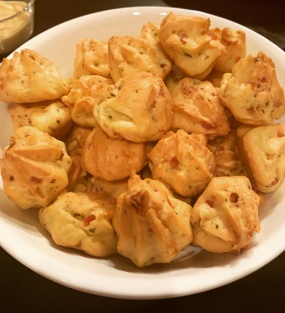 Since I had all these flour and butter heavy dishes, I wanted to offer a couple lighter and healthier options. I took some piquillo peppers and stuffed them with smoked mozzarella. I dressed the peppers with a mojo verde sauce (a José Andrés recipe) that I made by hand with the mortar and pestle. It was a labor intensive sauce, but the mortar and pestle makes the herbs feel so tender and lovely. This dish was so simple, but it probably was my favorite bite of the night.

I also made a greek yogurt dip I found on NYT Food. The greek yogurt is lightly seasoned and then topped with a sizzled scallion chile oil. I then sliced up some carrots, red peppers, and cucumbers for dipping. This yogurt dip does have a bite to it, which I loved. It was a flavorful, healthy treat that I would love to turn into a typical snack for me. 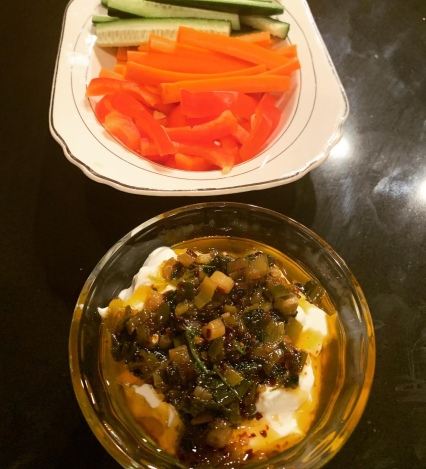 Speaking of snacks, I made a container of peppered peanuts roasted with simple syrup, salt, and pepper. These sweet and savory nuts made for a perfect little dish on the bar and side tables. We made these in class, and I kept thinking how they’d be a great little snack. I might start keeping a container of these on hand for a quick snack or to add to salads.

Since I am a pastry nerd, I couldn’t miss the opportunity to pull out some show stoppers for dessert. I started with these sweet cheese stuffed apricots that we made on our Turkish night event. I was surprised to see that all the available dried apricots were brown, while we had bright orange ones in class. I was concerned with how the finish product would look, but they were quite beautiful. I bloomed the apricots in a simple syrup seasoned with lemon, cinnamon, cloves, and bay leaf. After removing the apricots, I reduced the liquid down to a deep amber syrup. I remember in class having a hard time getting the syrup to reduce, probably because we made such a large batch. Here, I got this thick, flavorful syrup to glaze the finished dessert. The filling is made from whipping goat cheese, mascarpone, lemon zest and honey.

This next dessert was probably the biggest show stopper of the night. For a second pate a choux preparation, I made raspberry cream eclairs. I had just come off making some delicious eclairs for graduation when I saw a recipe for raspberry eclairs on NYT Food. (Yes, I spend a lot of time on their app). I felt the raspberry eclairs would be a fun treat appropriate for New Year’s Eve.

I did love these eclairs. Sure, my execution could have been better. My piping of the eclairs could have been more uniform, though they were fairly equal in size. I could have done a neater job with filling and dipping, as I was rushing to get them down and in the fridge. Overall, I thought I did a great job. While I absolutely love the classic chocolate ganache dipped eclair with vanilla pastry cream, I enjoyed elements of these eclairs that the classic ones don’t have. The filling (which is made from a gelatin based raspberry cream and lightened with fresh whipped cream) felt much lighter than using pastry cream. The glaze also gave a lighter touch than heavy chocolate ganache. This dessert had three containers of fresh raspberries, so the other elements needed to be light in order to not wreck the fruitiness. Because the filling was lighter, I also found that these held up better. The next day, the choux pastry was still crisp and not soggy. These raspberry eclairs were an elegant, colorful addition to our spread.

Finally, we have come to my favorite dish: the financiers. I know I spoke my love for these both in the cakes week and graduation posts. I am serious about wanting these to be my new signature. I have no doubt I can succeed in that after seeing the looks on my friends’ faces as they ate these little cakes. I still can’t get over how the browned butter brings these cakes to life. 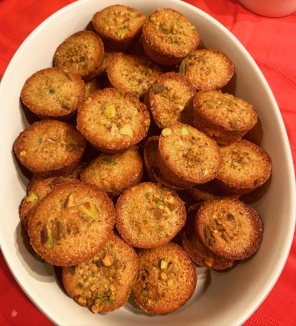 I set out to outdo myself from previous years, and I believe I achieved that. My menu was carefully planned, well-executed, and beautifully presented. It has been a while since I got to cook like this for others, and it made me so happy to be in that mode. I got to share my work with my friends and show them what I have been up to while I was away. This made me feel even better about some of my upcoming plans.

It has been a fast few months since I left DC, yet I feel like it was a lifetime ago. I feel like a whole new person. I exude much more confidence and clarity. I even had the gumption to wear a flashy body suit for the party. I am not sure what shone more brightly, me or the body suit. 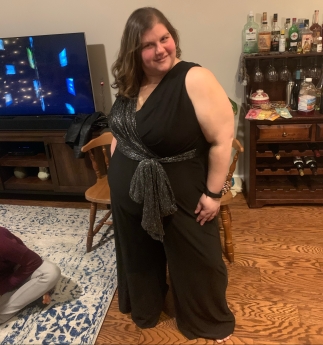 I also got to catch up with my friends and enjoy being in the presence. I have some great friends, and I loved getting the chance to just chill and enjoy the party, not worrying about the food, as it was already set. This was the perfect ending to an interesting year. 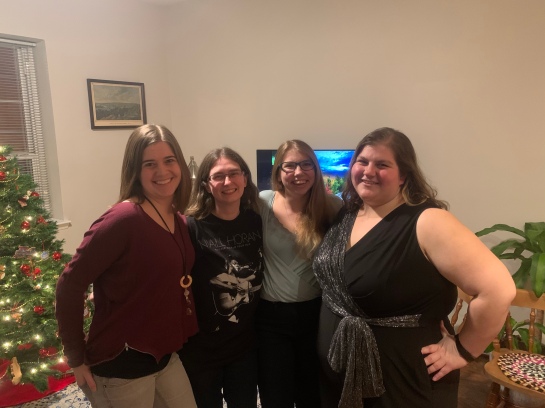