Do you ever see a cooking video on Facebook and think, “Wow! I should make that!” You might share some recipes to your wall, or you might be like me and click ‘save for later’ only to never return to the recipe. However, this week I saw a cooking video so good that I knew I just had to make it. I am talking about the onion tarte tatin from Tastemade. Just watch this quick video.

I was captivated by this savory tarte with these gorgeous caramelized shallots. I knew what I wanted to make for dinner this weekend. I followed the recipe (mostly) only I did trim the hairy ends off the shallots while still keeping them in tact. I also decided to make puff pastry instead of using store-bought.

I used half the puff pastry to make the tarte tatin. The smell of shallots caramelizing in butter and fresh herbs filled the air. There are certain cooking smells that just make me pause for a minute to appreciate them, and these shallots are a great example.

I patiently waited for the tarte to cook in the oven. A traditional tarte tatin (which dates back to the 1880s) uses apples and pie crust. The dessert was named after the Hotel Tatin in France, where it was created. A tarte tatin is made by cooking apples in caramel and then placing pie dough right on top of the pan to cook in the oven. Once cooked, you flip out the pie onto a plate to reveal gorgeous caramelized apples on top of pie crust. So, this onion tarte tatin is not very much like the traditional tarte tatin, except for the inverted cooking method.

I personally don’t care what you call it. I simply liked the idea of the finished product, and I was not disappointed. Shallots are more delicate in flavor than your yellow, red, or white onions. I’m not sure I have ever had caramelized shallots before. The shallots were soft and tender. They were super buttery with a hint of the balsamic vinegar. I popped quite a few of the onions in my mouth on their own to savor the taste. When I took a bite with the pastry crust, the dish came together. Flaky layers of buttery pastry paired with soft caramelized shallots…I’ve never had anything quite like this (in a good way). 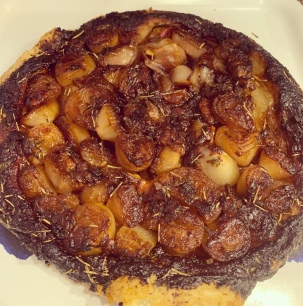 Final verdict: Did I love this tarte? Why yes, I did. I enjoyed this savory pie with it’s full buttery flavor and the fresh herbs. The thyme, rosemary, and sage added another layer of flavor to the dish. I could see myself serving this at a brunch. I don’t think I would make it for myself again (though I would want to). It is just too much butter for my stomach.

The tarte tatin only used half of my puff pastry recipe. So, what was I to do with the other half of the puff. I looked to my fridge and realized this was going to be another savory tart. I had some red onions I could slice and caramelize, leftover sharp cheddar, and cherry tomatoes. That could work as a tart, right?

Here’s what I did. After rolling out the puff pastry, I cut it into four equal squares to make little tarts. It is super important to keep puff pastry cold, so after cutting them, I placed them back in the fridge on a baking sheet while I did my other prep.

I caramelized the onions in a little bit of honey and set aside. I wanted to make sure the onions could cool down before going onto the puff pastry, so they wouldn’t start melting the butter. For the tomatoes, I dressed them with olive oil and balsamic vinegar and seasoned with salt. I let the tomatoes marinate for a few minutes.

To build the tarts, I made a layer of the caramelized onions then piled on the cheddar, leaving a border along the outside of the tart for the crust to rise. Then, I took the marinated cherry tomatoes and gently pressed them into the cheese. After building the tarts, I felt it would be a good idea to pop the tray back in the fridge to make sure the puff pastry wouldn’t be soft going into the oven. I baked the tarts at 425 degrees. I honestly didn’t time them. I just watched until the pastry shell looked brown and cooked all the way through.

Wow! These tarts rocked my world. I took a bite and my first thought was, “This tastes just like pizza but with a flaky crust. Did I just make puff pastry pizza? I think I did.” My best friend is going to give me so much crap when he reads this, but my favorite part of the tart was the tomatoes. The burst of the roasted cherry tomato in my mouth sent my tastebuds flying. Plus, paired with the melty cheddar, this was a savory bite made in heaven. I wish I had people around right now, because it is just not fair that I am the only one who gets to experience this. The next person I get to cook for just might get one of these tarts to enjoy. This was an excellent way to use the other half of my puff pastry.