I often proclaim that mac and cheese is my favorite dish (because it is), but if I could only eat one thing for the rest of my life, I would easily choose tacos. There are so many variations, fillings, garnishes, etc. I could never get bored of eating tacos. I am a taco lover for life.

Now, I am not Mexican and do not claim to have sort of authority on tacos. I am a white girl who grew up in Western PA eating taco bell and homemade tacos from packaged taco mix. I never had a “real” taco until I was an adult. Though I was so enamored by that first real taco that I have been chasing to learn as much about tacos as I can. This taco convert appreciates a good taco when she finds one.

A great taco starts with the tortilla. I prefer corn tortillas for tacos. The best tacos are made with fresh, homemade tortillas. A tortilla press and high quality masa will get you an unbelievable tortilla, but I also recommend supporting your local bodega or Mexican grocer, who undoubtedly will have fresh tortillas. Admittedly, I have lived in several cities with local Mexican markets. If you can’t get your hands on fresh tortillas, I recommend corn tortillas from brands like La Banderita, Mission, and Guerrero. I used La Banderita white corn tortillas for all the tacos pictured below.

So, once I get on the taco train, it is very hard for me to get off. Since, I bought a 30-pack of tortillas, I had to make a lot of tacos to get through the pack (not that I am complaining).

I started with carnitas and chicken tacos for Cinco de Mayo. I recently started working at Wegmans in Prepared Foods. On Cinco de Mayo, the chef sent me home with some carnitas and shredded chicken for tacos. I have a soft spot for carnitas, and these carnitas were tender and flavorful. For garnish, I chose raw white onion and fresh cilantro. I forgot to get some salsa, so I used a little hot sauce for these tacos. The beginning of this taco journey was off to a great start!

Next, I made some breakfast tacos. I had some chorizo left over from another recipe and I thought…hmmm…don’t breakfast tacos sound great right about now? And great they were! Starting with some yellow onion that I sautéed down,  I took the casing off the chorizo and broke up the sausage as I cooked it (three links in total). Once browned, I added six eggs, stirring occasionally until I had a big chorizo and egg scramble. This was the filling for my breakfast tacos.

This made a very big batch of taco fillings. I had enough for breakfast tacos for 3-4 days. Sometimes I added queso fresco and hot sauce, sometimes salsa, and sometimes just hot sauce. Any combination of garnishes I tried worked well with these breakfast tacos. The paprika in the chorizo gave these tacos a nice smoky flavor with a little kick to them. The best part of these breakfast tacos was eating them for a late breakfast before going to a closing shift at work (which starts at noon). This allowed me to have a filling meal to sustain myself until I got my “lunch” break at work.

Once I was this far down the taco rabbit hole, I had to keep going. I was determined to finish my pack of tortillas with nothing but flavorful tacos. This led to my first time ever making duck tacos (not my first time eating them though). I’ve had some phenomenal duck tacos at Gringos & Mariachis in Bethesda, MD. (I also recommend the duck nachos.) Eating these duck tacos inspired my creation. That, and seeing the individual duck breasts in the poultry section of Wegmans.

I made a quick marinade for the duck breast: a little olive oil, lemon juice, garlic, paprika, cumin, salt and pepper. I foolishly forgot to pick up limes, or else I would have used lime juice. (Sidenote: the best tacos are served with a lime wedge to give a squirt of acid right before eating, so sadly I was lacking this on my tacos.) I did have a lemon at home though, and that worked just fine for the marinade. I honestly think this could have been good with fresh squeezed orange juice, too.

After marinating for about an hour, I seared my duck breast skin side down until the fat was rendered and the skin was crispy. I flipped the breast to sear the other side, then I finished cooking the duck in the oven. I wanted a very thin cut on the duck for the tacos, so I used a serrated knife to carve the duck as thinly as I could. These tacos were garnished with white onion, cilantro, queso fresco, and chipotle salsa. Wow! These tacos were out of this world! I don’t know why I haven’t made my own duck tacos earlier. Duck breast cooks a lot like steak. The medium rare duck was tender, juicy, and hit me with brightness from the citrus marinade, as well as a little warmth from the cumin. Duck was an excellent choice for this taco.

Last but certainly not least, I made beef short rib tacos. These last two taco fillings (the duck and short ribs) came about by me wandering through the meat section of Wegmans after work, looking for something that would make a great taco. I saw the beef short ribs. Barbacoa! I love barbacoa, but I had never made it before. Maybe I could do something similar to barbacoa with this meat. I decided to try a recipe for sweet and spicy short rib tacos by Marcela Valladolid, because I had all the ingredients at home. (Maybe I will try a traditional recipe for barbacoa sometime soon though.)

I took the Michael Leviton approach to braising meat. Chef would say, “braises are always better the second day.” After blending all the ingredients to make the sauce, I braised the meat in the oven at 275 degrees F for 3-4 hours the first evening. Then, I cooled meat and liquid and stored in the fridge over night. When I woke up in the morning, I scraped off the small layer of congealed fat. Then, I put the meat back in the oven at 275 degrees for about 4 hours (until lunchtime).

When I took the meat out, the liquid base was still pretty thin, though it had reduced some. I took the beef out to rest and put the braising liquid on the stove uncovered over medium heat to reduce until it had a more saucey consistency. I knew the meat would re-absorb some liquid, but it definitely needed to reduce some before I could mix it back with the meat, so I didn’t end up with soup. This also helped to concentrate the flavors of the meat it had been cooking into this sauce.

Speaking of meat, the short ribs were so tender, they came apart at the mere touch of a fork. I shredded up the meat, and then I added my reduced sauce into the meat. Now, I expected this meat to be good, since the scent of the ribs cooking had been illuminating my apartment for two days. However, I wasn’t prepared for what I experienced when eating this. The tenderness of the meat combined with the flavor burst of the sauce kissed my tongue so gently but sensually, I paused in awe to savor the moment. I am relieving the experience as I write, and it is taking every ounce of effort not to run down to the store and get some more short ribs. These were by far my favorite tacos on the bunch. I am not typically a beef gal, but I just couldn’t get enough of these tacos. Yes, there was a long process to get these tacos, but every second of that long braise was worth it. 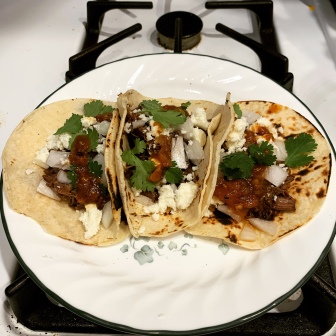 All journeys eventually come to an end. The short rib tacos were an excellent final stop on the taco train. I can’t say I won’t revist that recipe soon. My love for tacos endures, and this time in quarantine has only strengthened it. All these tacos have provided me with a sense of comfort during this time. I have some other posts to write, but I will still be thinking about all these tacos.