As I mentioned in my last post, while I was in Cincinnati for the Fourth of July, I helped my aunt host a dinner party focused on Greek cuisine. Since she and my uncle had just returned from nearly a month long trip to Greece, she wanted to share her culinary experience with her friends.

My aunt has a rich repertoire of culinary training and experience. I’ve been eating her amazing cooking for years. I got to play the role of sous chef that day. I was so happy to be able to learn from her and soak in all her culinary wisdom.

Throughout my visit, my aunt had been sharing stories and pictures with me about all the great food they ate while in Greece. She constructed a wonderful menu for our dinner, primarily based on dishes they had during their travels. On the menu was:

As an appetizer course, we served the bacon, date, and almond rolls; fried aubergine; tzatziki; and garlic rosemary focaccia.

While my aunt was making our tart, I prepared the bacon, date, and almond rolls. I simply stuffed Medjool dates with an almond and then wrapped the dates with bacon. After securing the bacon with a toothpick, we cooked the rolls under the broiler. This was our first dish ready to go, and they were delicious. Three ingredients have never tasted so good! Of course, you can’t go wrong as far as bacon is concerned.

I also whipped up the tzatziki in the food processor. We ended up making it vegan, due to an anticipated guest being a vegan. The tzatziki was going to be used during the appetizer and main courses (as an accompaniment to the fried eggplant and the chicken souvlaki). Vegan yogurt is much thinner than Greek yogurt, so we did use some vegan cream cheese to thicken the tzatziki.

For the fried aubergine, it was my job to slice the eggplant into rounds and dry them out on paper towels to help release the bitterness. Shortly before the guests were expected to arrive, my aunt prepped a simple batter for the eggplant. She fried them in batches and drained them on paper towels before serving. These little fried eggplants were addicting. I could not stop popping them into my mouth. The fried batter was light and crispy. They paired excellently with the tzatziki.

The next dish is not exactly Greek.  My aunt commented on how she noticed similarities and overlap between the food she ate in Greece and the Italian dishes her grandmother would prepare. That part of our family came from Southern Italy near the Eastern coast, not too far geographically from Greece. So, the similarities make sense. The focaccia recipe was my great grandmother’s. I have had this many times when my aunt has made it. This time, I got to learn how to make it through watching her. I am planning to make some soon. Focaccia is such a wonderful bread. The salty crust with a soft interior is such a perfect bite, made even better dipped in some high quality olive oil. 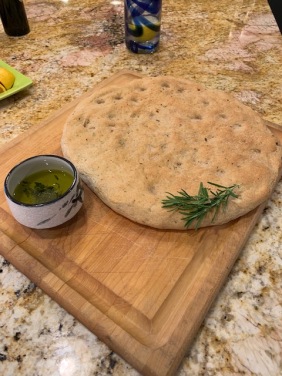 Our appetizer round got this meal off to a great start. Everything on the table was delicious and worthy of eating. Our group ended up being slightly smaller than expected, due to some last minute cancellations. That just left more food for us to devour! 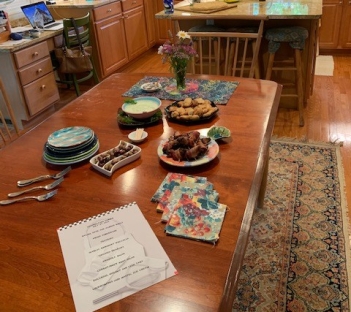 The appetizers were served at the kitchen table, but we moved to the dining room for dinner. The main course consisted of the chicken souvlaki, the zucchini tart, and the two salads. We also carried over some of our leftover appetizers to accompany our dinner. 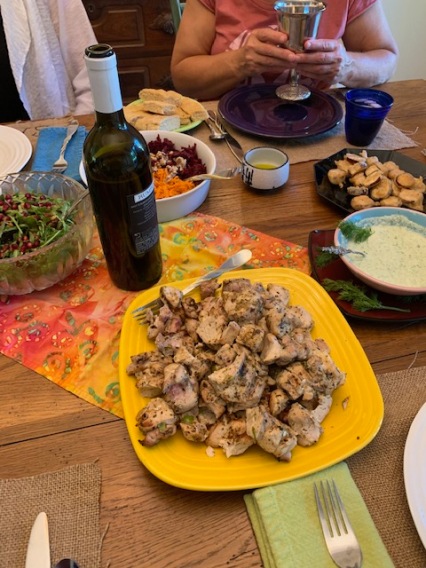 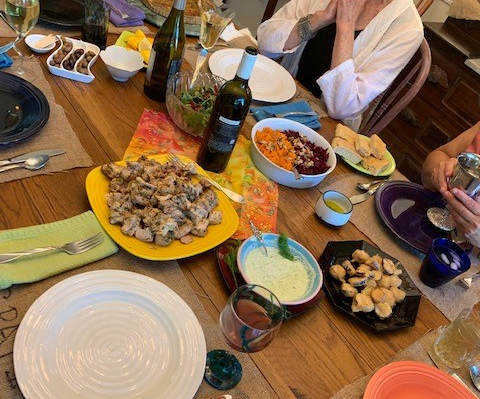 The chicken souvlaki was actually the first dish we began preparing for the entire meal. I cut the chicken into bite-size pieces and then prepared the marinade. We used both breast and thigh meat for this dish. After a few hours of marinating, I put the chicken onto metal skewers. My uncle Dave grilled the chicken while my aunt and I finished up preparations for the meal. I almost cannot describe how good this chicken was. The oregano, paprika, olive oil, and wine provided such wonderful flavor for the chicken. The chicken was juicy and tender. My uncle cooked the chicken perfectly. 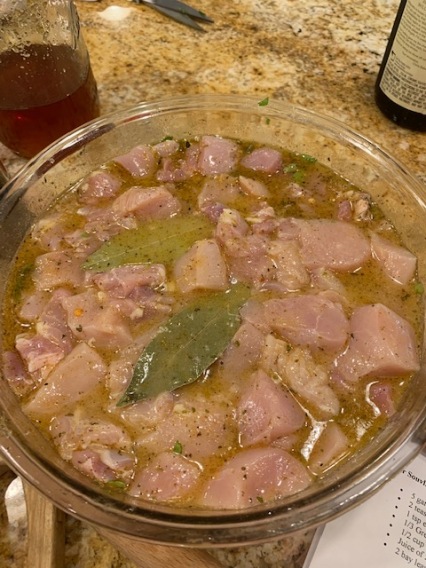 My aunt completely prepared the zucchini tart while I was doing some other tasks, so I don’t know everything that went into it. I know there was zucchini, onion, walnuts, egg and cheese. She made the crust from scratch and then made the filling. The tart was bright and colorful. It was also light and slightly fluffy, with the perfect ratio of crust and filling. 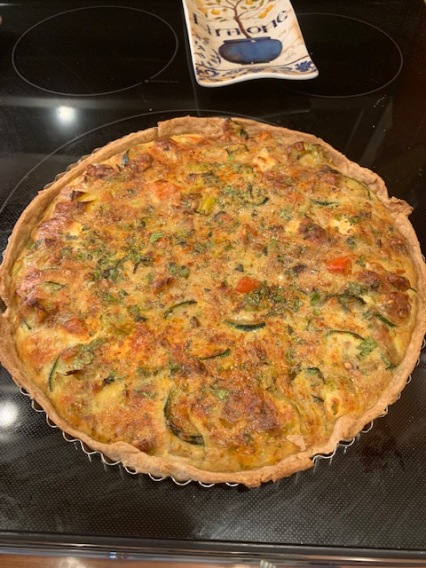 Alongside these two main dishes, we served two delicious salads that my aunt put together. The arugula salad was easy to put together. It contained arugula, figs, sunflower seeds, pomegranate seeds, and a dressing my aunt made. We were going to serve some grilled halloumi cheese on the side, but we forgot. The salad certainly wasn’t lacking though. The other salad was half shredded beets and half shredded carrots. The vegetables were lightly dressed with oil and other herbs and spices, including fresh ginger root. The ginger element was a wonderfully bright note that stood out to me in this salad. 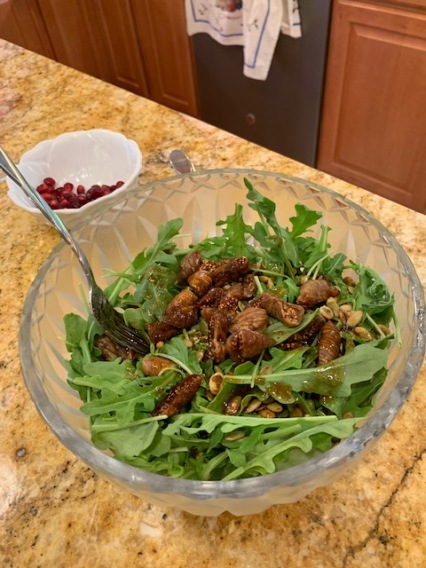 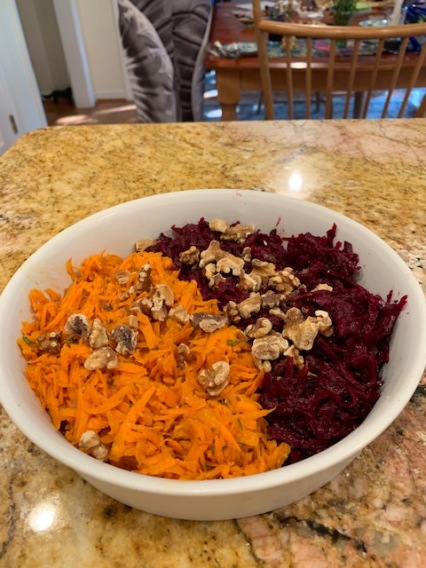 After our main course, my aunt and I went back to the kitchen to finalize our dessert. I had actually whipped together the dough for the loukoumades prior to dinner.  It needed some time to rise. Now, we could spoon the dough into balls and fry them. My aunt handled the frying. She had also made some mastic ice cream earlier. Mastic is a gum/resin made from the sap of the mastic tree. I am still not sure how to describe what it tastes like, but it added an additional flavor to the ice cream. My aunt made the ice cream by crushing up some mastic and mixing it into some vanilla ice cream and then refreezing.

To put the dish together, we piled the loukoumades onto a platter and drizzled them with the orange honey syrup we had made before. Given that the dish was not very sweet, we decided to also drizzle some honey over top. Then, we topped them with crushed pistachios.  A more common preparation appears to be topping them with sesame seeds, but given my allergy, we went with another version we found online with pistachios. Each person then served themselves some loukoumades in a bowl, and we topped them with a scoop of vanilla ice cream and then a bit of the mastic ice cream.  This dessert was unique and traditionally Greek. I found these fried dough balls to be quite delightful. While the loukoumades were not sweet at all, the syrup, honey, and ice cream provided plenty of sweetness to create a balanced dish.

We also served some vegan truffles that my aunt and I had made the other night.  These truffles are made from vegan chocolate and the cream on top of can of coconut milk. These truffles, rolled in cocoa powder, were so delicious.  I am thinking of brining this into rotation for parties and get togethers.

After we enjoyed our desserts, we sat in the living room to view pictures from the trip. One of the dinner guests had also attended the trip. I got to see some amazing things through these photos and heard stories from the trip. I was in awe and got an itch to travel. Too bad it might be awhile before I have the money to travel to somewhere like Greece, but it is on my bucket list.

I am so glad I made this trip to Cincinnati. We had a fantastic time together eating and socializing. I also learned so much through assisting my aunt in this meal. Cooking with her gave me a renewed sense of passion for my work. My aunt is one of my biggest inspirations for my cooking.  I am honored to have been able to cook alongside her for this meal.