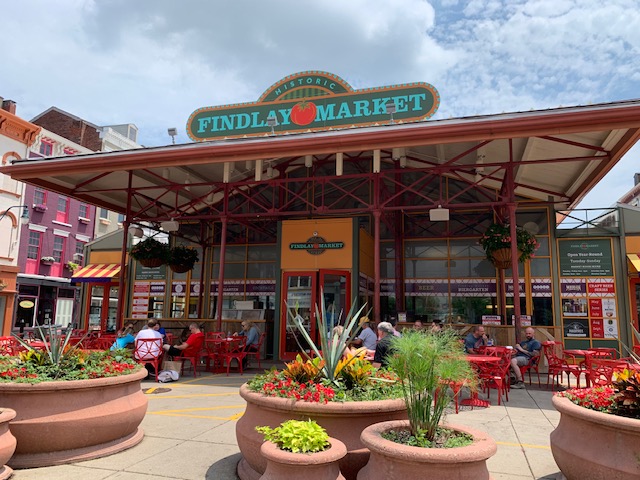 Over the 4th of July holiday, I went to Cincinnati to visit my Aunt Tracy and Uncle Dave.  My aunt is my dad’s older sister, and the two of us have a lot in common.  We look alike; we are the second  born of four children (with an older sister and two younger brothers); we share the middle name Jo; oh, and we both love to cook and lean into our Italian heritage through our cooking.

Just like I first learned about cooking through my grandmother, my aunt learned through her mom and grandmother.   Since my grandma passed when I was only eight, I actually learned to make many of her and my great grandmother’s recipes through my aunt.  She is an unbelievable cook, so I was very much excited to spend some time with her in the kitchen before I take off for Boston to begin my new culinary journey.

I flew out to Cincinnati from DC on July 3rd.  When my aunt picked me up at the airport, our first stop was to Findlay Market.  In all the years my aunt has lived in Cincinnati, I had never spent much time in the downtown area.  My aunt thought I might like to see the market and grab a bite for lunch.

Findlay Market is Ohio’s longest operating public market.  My initial impression of Findlay Market was that it was very cute.  If I lived in that neighborhood, I would use the market as my primary grocery shopping location.  There are vendors for meat, dairy, produce, bread, etc.  I loved walking up and down the market looking at the different offerings. 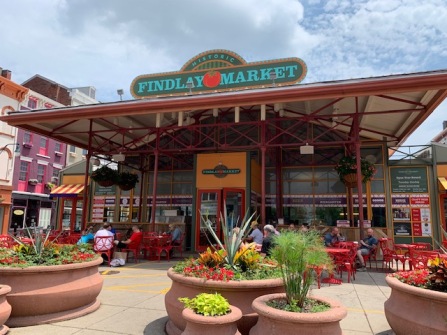 The market has primarily raw food vendors.  Unlike similar markets I have seen in other cities, there weren’t many prepared food vendors for immediate consumption.  The ones that were there seemed intriguing though.  We picked up some lunch at Mama Lo Hizo, a Mexican food stand.  My aunt got what looked like a fish gordita, while I got the fish burrito.  Their tilapia used for fish tacos, burritos, etc. looked so juicy and flavorful, and I think we made a good choice.  We also tried a couple treats, like a corn muffin topped with queso blanco and potato pancakes, which look like Mexican latkes. 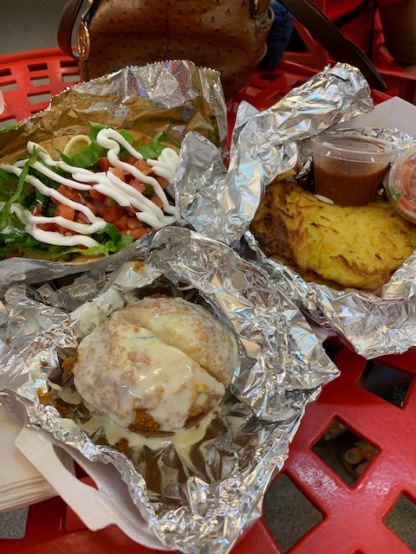 My burrito was so packed full of goodies that I wasn’t sure how I was going to eat it with my hands.  I saw the server struggle to roll the burrito due to how much filling they used.  I decided it needed a fork and knife, but it was quite good.  I really did love the preparation of the fish.  My favorite dish we tried was the corn muffin.  It was ridiculously moist and had a sweetness to it.  I would have seen it almost as a dessert if it hadn’t been lathered in queso.

We also tried a few treats from a bakery in honor of my late grandfather’s (my aunt’s dad) birthday.  We tried a mini cheesecake and a chocolate mouse cake.  We also took home a blueberry pop tart that we shared during breakfast the next morning.  The pop tart was divine.  I might just take a stab at making pop tarts this summer. 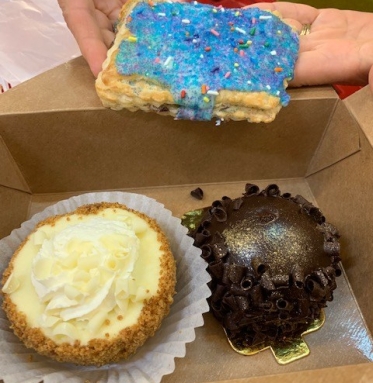 While we were at the market, we picked up some ingredients for dinner.  We got some chicken and lamb burgers and some feta cheese.  We had also picked up some goetta, which was something I had never heard of before.  Goetta is a sausage like mixture, similar to scrapple.  It has German inspiration, but is very popular in the Cincinnati area.  The mixture is made from meat, oats, and spices.  It sometimes cooks up like a patty, but the version we had seemed like maybe it was a little heavy on the oats.  When cooked it looked a little more like rice.  It tasted good though. 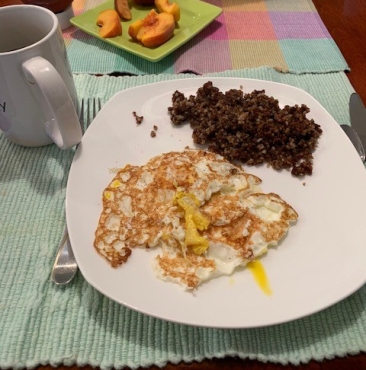 For dinner that night, my aunt made a gorgeous Greek salad while my uncle grilled the burgers.  She also made some rosemary and garlic roasted potatoes and set out some Greek olives.  They had just returned from Greece, so we were embracing a Mediterranean theme for dinner.  We had a lovely dinner together. 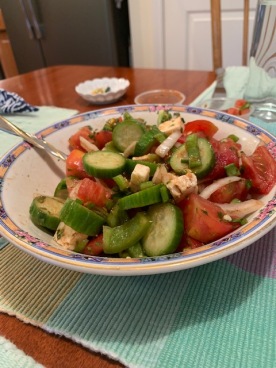 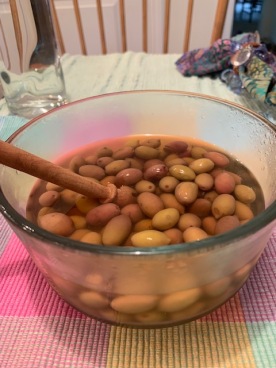 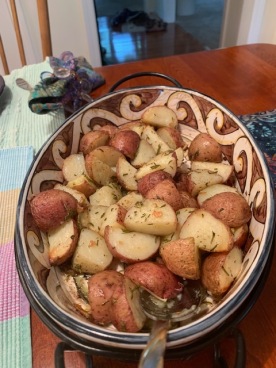 The following day was the Fourth of July.  In the morning, I got to experience a local treasure, which is Jungle Jim’s.  This is an international foods market in Clermont County.  My aunt has taken my parents there a few times, and they have raved about it.  This was one of the things I was sure I wanted to see during this visit.  I’ll admit that  I found the market to be corny yet intriguing.  The decorations were over the top and aged, but I can’t help but admire the selection. 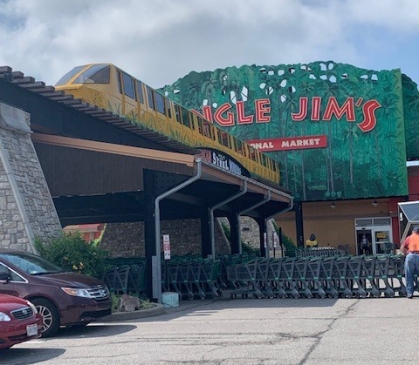 How I wish I had a grocery store like this near me.  They had sections for just about every type of international cuisine.  There is an endless selection of spices, legumes, pasta, sauces, etc.  They even had an unbelievable sprinkle selection. Normally, I have to order sprinkles online if I want anything creative.  They even had a whole section (blocked off as if it were its own room) devoted to hot sauce.  That is my dad’s favorite part.  They also have a huge cheese section, produce galore, and a sushi restaurant in the middle of the market.  These are just some of the features of this store.  We did a large shopping trip for everything we’d need not only for the Fourth but for our dinner party the next day. 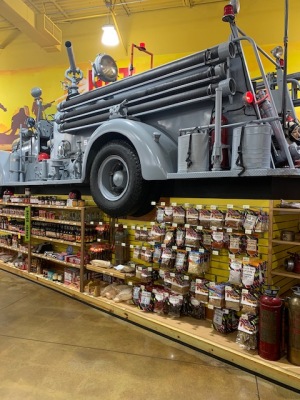 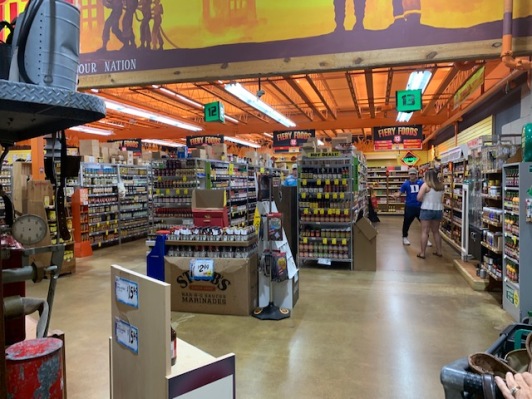 This is all hot sauce!

When we got home, we started preparations for the Fourth of July, which we would be spending in Indiana.  My uncle’s kids have a family farm out in rural Indiana.  We headed there for a cookout.  My aunt prepared a fruit salad and these delicious gluten free blueberry pear bars.  We also picked up some veggie burgers for the grill.  With everything in tow, we headed out to the country. 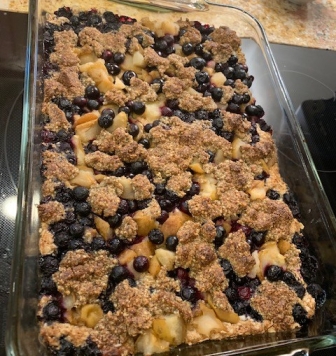 We had such a wonderful day.  Being out in the country was so peaceful, minus the flies that wouldn’t leave me alone.  On the farm, I got to see their sheep frolicking in the field.  Especially when there was a brief stint of thunder, the sheep got very vocal.

There was also a swimming pool, so I got to escape the heat in the afternoon.  The time just seemed to pass so quickly while we were on the farm.  I’m not saying I would want to live in a rural area, but it was nice to escape the he bustle of city life for a bit.  However, I did manage to get a little burnt and crispy from the sun. 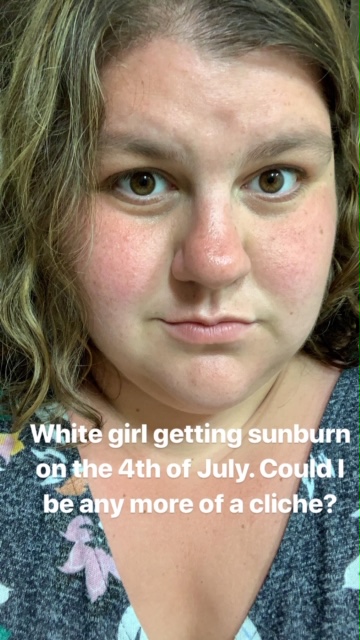 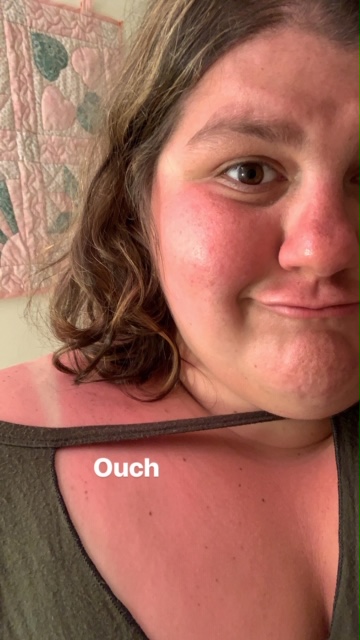 After the picnic is over, we headed back to Cincinnati.  We ended up finding a good viewing point on the Kentucky side of the Ohio River to watch the fireworks.  It was a great ending to an awesome day!

The following day, my aunt and I spent a majority of the day preparing for our dinner party that evening.  This dinner was so special, it is worthy of its own post.  That will be coming soon!

Before we got ready for dinner, the three of us headed to Skyline Chili for lunch.  I had long heard about the famous Cincinnati chili served over spaghetti.  I like to try some food unique to each city/region when I travel.  For this trip, I got to try goetta and skyline chili. 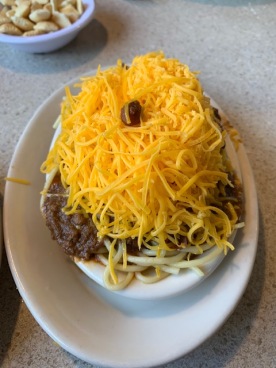 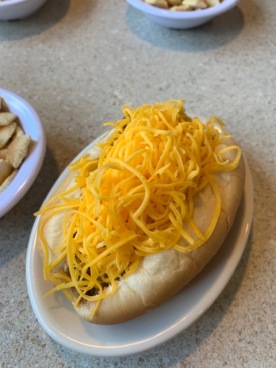 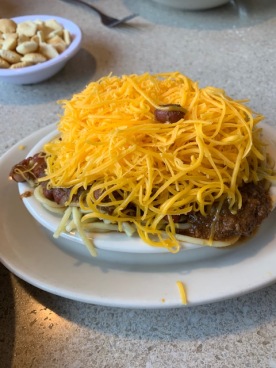 The hot dog and chili was not quite like the Coney Island chili dogs I grew up eating in New Castle.  In my opinion, there is nothing quite like New Castle chili for hot dogs.  Though I admit, I rarely eat hot dogs in my adult life.  The chili on top of the spaghetti was oddly intriguing.  I found the chili to have a surprising consistency.  It was more watery than I thought.  When I think of chili (aside from the hot dog chili of my youth) I think of a more stew-like substance.  Their chili here was served with oyster crackers to soak up the liquid from your spaghetti chili.  Apparently, most people eat the oyster crackers with hot sauce, so I gave it a try. 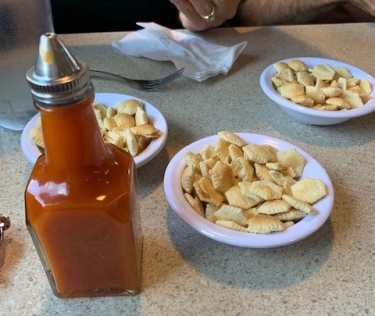 So, I got a full Cincinnati food experience.  It was an incredibly successful trip.  I got to take a short break just before my last week of work and spend some rejuvenating time with family.  It had been a good give years since I had been in Cincinnati, but I look forward to my next trip there.  Thanks to my aunt and uncle for their hospitality and a great visit!