I am excited to share two Irish themed desserts I made for St. Patrick’s Day. The first dessert was chocolate cupcakes with Baileys frosting. I know people always make Baileys dessert for St. Patty’s Day, but I really wanted to try it myself. Baileys make such a rich and creamy frosting and pairs great with chocolate. I made these cupcakes to accompany my St. Patrick’s Day dinner, and my plan was to take the leftovers to work.

As you can see from the picture, my cupcakes sunk a bit in baking. That is because I slightly overfilled them. I did try to only fill halfway, but it is difficult. The sunken top really did not affect the taste of the cupcakes. They were still light and moist. This even left me a nice crevice to hold some extra frosting.

If you have never had Baileys frosting, I highly suggest you change that. It truly is divine. Chris made a comment about how it had a strong Bailey’s flavor, which is true. There isn’t just a tablespoon or two in this frosting. It essentially replaces the heavy cream I would normally use in buttercream. This was such a tasty treat. I hope my co-workers enjoy the leftovers!

Since I guess cupcakes weren’t enough, I decided to also make creme de menthe brownies.  Honestly, I just couldn’t chose which dessert to make, so I made both.

I followed this recipe by Wondermom Wannabe, only I made brownies from scratch instead of box brownies. The process was slightly more time consuming, but I generally find it to be worth it to make my own brownie mix. 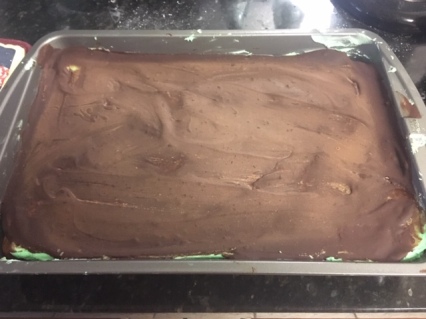 These brownies are layered with a smooth creme de menthe frosting and a chocolate icing. It takes awhile to make completely, because you have to chill them. The finished product was amazing though. I may have snuck one out of the tray for breakfast before I left this morning. I mean you can’t just serve a dessert you haven’t taste-tested, right? (That’s my excuse anyway).

The brownies were so good, just like the cupcakes. Here’s to amazing treats that I got to share with my co-workers today! What fun baking treats will I experiment with next? You’ll have to stay tuned to find out!