I took on a HUGE baking challenge for this holiday season. Just part of that was making 12 different types of biscotti. This post is all about how I turned my apartment into a mini biscotti factory.

If you have never had them before, biscotti are these hard, Italian cookies eaten with coffee. The name literally means twice baked in Italian. I am very familiar with these cookies, because my dad probably doesn’t go a day without eating them. We started making biscotti together at Christmas time when I was in college. It probably wasn’t until last year around the holidays that I started getting really serious about making biscotti on my own. I had nailed a couple flavors last year, and I made them repeatedly for a couple months. I made so many batches of biscotti that I was practically giving them out at every turn.

Biscotti are fairly easy to whip together for the dough, but you have to be smart about the baking process. You want them to get hard and crispy, but you don’t want them to burn. I find the best strategy is to bake them in two long logs on a baking sheet at 350 for 30 minutes. Then, let them cool for about 10 minutes before slicing into strips. For the second bake, turn the oven down to 325, cooking the slices cut side down for 15 minutes on each side.

This year, I decided I wanted to make 12 different batches, so I could expand upon my skills and develop new flavors.

This is the first flavor of biscotti I mastered using our family recipe, and it is one of my dad’s favorite. He specifically requested this one again this year. The base uses my grandmother’s recipe with dried cranberries. The cooled cookies are then dipped in tempered dark chocolate on the bottom side. These ones are especially made for my dad, so I hope he enjoys them.

This is another flavor my dad requested. I used this recipe from Cooking on the Front Burner. The only differences were that I doubled the poppy seeds (at my dad’s request) and I didn’t make the glaze. I did not find that to be necessary. I had never had lemon poppy seed biscotti before, so I wasn’t sure what to expect. They were quite delicious though. You could definitely taste the lemon without it being overpowering. I think they were lovely without the glaze.

This next choice was inspired by one of my favorite flavor combinations. I can’t resist a good cranberry orange scone or muffin. My work gets bagels every Monday, and I always try to grab one of the cranberry orange ones. I found this recipe on All Recipes, and it seemed simple enough. This was my first time ever using orange extract. I was really hoping it wouldn’t be too overpowering, since I know using these extracts can end up tasting medicinal. Fortunately, the orange flavor was present but subtle, and it reminded me of my favorite bagel. 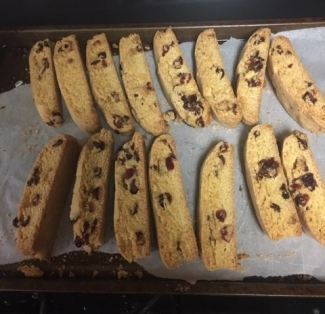 When I think of classic Italian flavors, amaretto definitely comes to mind. It is one of my favorite gelato flavors. I used this recipe from No Thyme to Cook, but I replaced the whole almonds with a small package of sliced almonds. I have to be honest with you. As much as I love my grandmother’s recipe, these are the best biscotti I have ever made. The flavor was just divine, and it had the perfect crisp and crunch I want from a biscotti.

I started making chocolate hazelnut biscotti last year. I adapted my grandma’s recipe to get this nice Nutella flavor into this biscotti. Last year, I used chopped hazelnuts in this recipe.  I decided to not do that this year because I was making so many flavors, and hazelnuts are expensive. Instead, I used the extra chocolate chips I had on hand. This will always be one of my favorite biscotti flavors, because I am a nut for Nutella. These turned out just as great as last year, and the chocolate chips also works well.

I thought of this flavor with my dad in mind. He loves anything coffee, so I thought this would be a great flavor to add to my mix. I found this recipe on The Monday Box. I have a few comments about these biscotti. The chocolate is a tad overpowering. I could barely taste the espresso through all the cocoa flavor. I am going to experiment a bit and find a better combination to get the coffee flavor to come out more. I even added some coffee extract, but the chocolate was still stronger.

This is a flavor idea I got from my friend Desireé. I came up with my own recipe for this, and I think it needs a little adaptation before it is ready for public consumption.

This ended up being a bit of a tragic batch of biscotti. I ended up with not a significant amount of dough, so I made one large log instead of two, which was a mistake on my part. When I took these biscotti out of the oven, they appeared on the surface to be done, but in reality, it was not baked all the way through. The bottom and inside was still primarily raw. I was feeling tired and just wanted to be done for the night, so I decided to go ahead and slice them instead of putting the tray back in the oven. Cutting them at this point resulted in them just breaking into a bunch of pieces. I put them back in the oven until the inside were baked through. These are not going to get served to my friends, but I still like the idea of

This was one of the last flavors I came up with when I was running out of ideas. I’m becoming more into pistachios lately, and cherries and pistachios seemed like a good pairing. I used my grandmother’s biscotti recipe and them added some chopped pistachios and dried cherries. These ones got a little bit over-baked on the bottom, but fortunately they were not burnt. This is not my favorite flavor that I made, but they are a tasty treat to add to the rotation.

This was the first batch of biscotti I made this season. I had the idea to make a snickerdoodle-inspired biscotti, as that is a cookie that I see a lot during the holidays. Plus, cinnamon sugar is always a hit. I made this recipe from Brown Eyed Baker.  I definitely love the cinnamon sugar topping, but my favorite part of the recipe is the cinnamon in the dough. That crispy cinnamon cookie just melts my heart a bit. I definitely recommend trying this recipe. 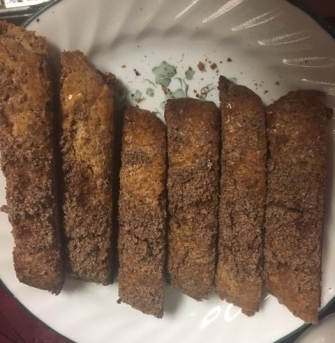 The last three biscotti batches I made were gluten free. I wanted to make these for my friend Ashley, who is allergic to gluten. I used the all purpose gluten free flour blend by Cup4Cup, and I must admit, I really couldn’t tell the difference in these gluten free versions. The gingerbread flavor was another idea I got from Desiree. I will have to remember what I did to make these and write down the recipe. I must say though that these turned out great. It was a fantastic two-for-one treat. These cookies had the best of gingerbread and biscotti. They were nice and crunchy and had all the classic flavors in a good gingerbread. 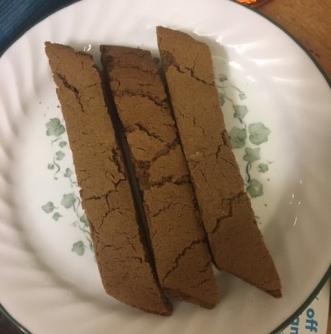 This was the flavor that Ashley requested, and of course I wasn’t going to deny her of her wishes.  This was a great flavor idea, because chocolate is just the perfect way to anyone’s heart. I used this recipe from Once Upon a Chef. The great thing about the Cup4Cup flour is that you can just replace the same amount of regular flour for this flour in any recipe. You don’t have to be limited by “gluten free” recipes. These biscotti turned out great, and the chocolate chips were a great treat in these biscotti. I will definitely be making these again.

The final flavor I made were funfetti, another idea from Desiree. I used this recipe from The Spruce Eats, and also made these gluten free. I decided to replace the rainbow sprinkles with festive red, white, and green sprinkles. In an attempt to get these as hard and crunchy as I wanted them, the edges got a little too brown. I ended up dipping them in white chocolate and adding some more sprinkles to mask some of the brown edges. I do think they still tasted well, even if a little too crispy.

Well, my mission was accomplished, and I got all of my biscotti made. I am going to have biscotti in my freezer for awhile, but I also am giving a lot of these away. Baked goods can make a great present, and you can even find cute packaging to give away your treats.

2 replies to The 12 Days of Biscotti