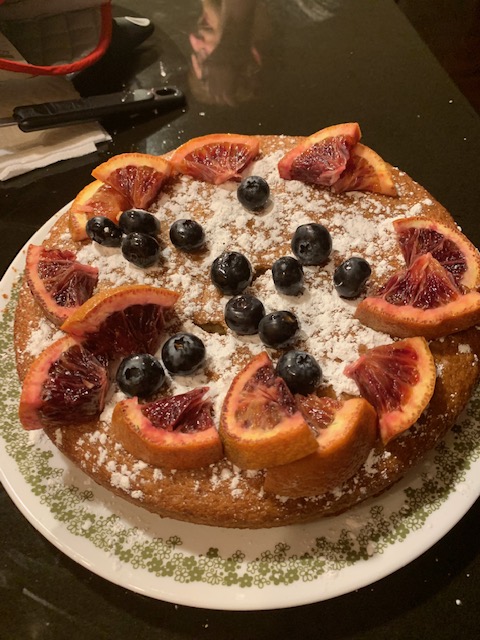 Sunday family dinner with Chris and Andrew has become one of my favorite food traditions.  I need to savor ever dinner I can before I move to Boston, though I hope we can carry on the tradition over Facetime now and again.

This past Sunday, Andrew was out of town for work…funnily enough in Boston.  Chris and I decided to still have family dinner.  We hosted our college friend, Rogelio, and his boyfriend, Bart.

Bart is vegan, so that presented a slight challenge for preparing this meal.  I cook vegan food now and again, but I don’t normally cook a vegan meal from start to end.  Even when I am trying to cut back on meat, I am a tried and true cheese lover.  Nonetheless, I do love a challenge.  Family dinner normally consists of a main dish, a side (normally a vegetable), and a dessert.  I imagined the dessert would be the biggest challenge for a vegan meal, since the desserts I make tend to be dairy heavy.  By that I mean butter…lots and lots of butter.

Chris had a genius idea to make cauliflower steaks from one of his cookbooks.  It is this amazing cookbook that designs recipes around seasonal vegetables, splitting up the year into six agricultural seasons.

This recipe involves roasting the “steaks” in the oven and then topped with pickled vegetable salsa/slaw.  The topping was rather salty and briny.  That was due to the strong olives in the topping.  Neither Rogelio nor I like olives, and these were rather potent ones.  Between the peppers, parsley, and capers, however, they were not an overwhelming taste.  I did find the peppers to be a little bit spicy, but fortunately not too much.  There ended up being a rather nice balance of flavors in this dish.

Chris was having some struggles trying to cut the cauliflower steaks.  The first head of cauliflower had a rather high core, making it incredibly difficult to cut a full cross-section.  He was not pleased, to say the least. 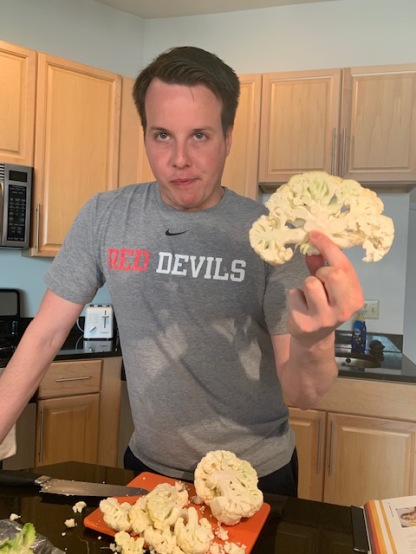 Fortunately, he was able to get a couple steaks from this cauliflower and had much better luck with the second cauliflower.  I am glad he asked me to get another head of cauliflower when I was at the store.  He was so proud of his “steaks.” 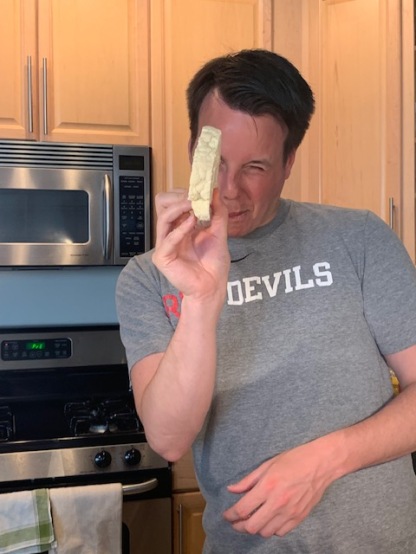 All that was left to do was to roast them and add the topping when done.  For the non-vegans, we also added some shredded parmesan cheese for a little extra flavor and texture.  I greatly appreciated the cheese on this dish.  So, maybe the meal wasn’t entirely vegan, but the cheese was an option add-on, so I am going to still say it was a vegan meal. 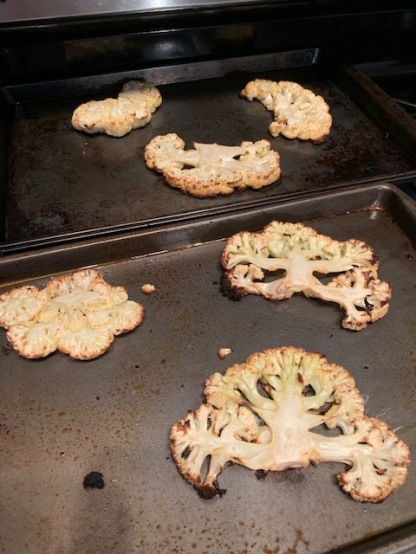 To accompany the steaks, I made a “creamy” white bean soup.  This soup was based off of Marcella Hazan’s recipe with ingredient adaptation by me and cooking method adaptation by Chris.  We of course substituted vegetable broth for the chicken broth.

When I heard “white bean soup,” I was thinking it would be more of a broth soup.  So, I wanted to embody some of the flavors from my favorite white bean dish: white chicken salsa verde chili.  I grabbed some jalapeños and salsa verde to slightly spice up this soup.  However, with Chris’s recommendation, I ended up blending about half of the beans to create this incredibly creamy texture.  I was worried the spice would not mesh well in this dish with that method; fortunately, that was not the case.

The soup was an excellent addition to the meal.  The spice was subtle, except when you got a bite with a chunk of jalapeño.  Even then, the spice level was well-balanced, and this gave more flavor to an otherwise one-note dish.  This soup was so easy to make but so delicious.  I will absolutely be adding this into my winter rotation. 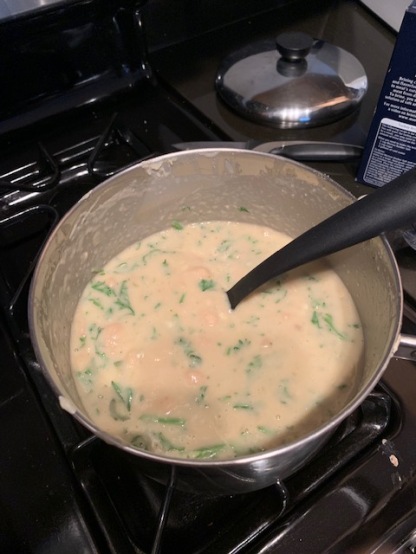 As for dessert, Chris gave me the idea to make an olive oil cake inspired by the delicious slice we had in Boston and Alden & Harlow.  I needed to skip the blood orange buttercream, as I was not about to taint buttercream with a non-dairy butter.   I still wanted to incorporate blood orange in some way.

The trick to vegan baking is finding a way to get your cakes to be moist without using butter or milk.  In this cake, that came in the form of olive oil, almond milk, and applesauce.  I decided to use this recipe from My Darling Vegan, only I substituted blood orange for the lemon.  Any citrus would have brought this cake to life, and I am sure I will try it one day with lemon.

I should have known this when I put the cake in the oven, but this was the most moist cake I have ever had.  The batter was very wet without being runny.  This cake needs to bake for at least 45 minutes in order for the liquid to cook in the batter.   Even so, it was incredibly moist.  I took a picture of it cut so you can see just how moist it was.  It is amazing that you can tell that from just a picture.

Before serving, I sprinkled powdered sugar on top and decorated it with blood orange slices and blueberries.  This cake was the biggest hit of the night.  We devoured this cake, much like Chris and I did to the cake we had in Boston.  Between the four of us, we ate the entire cake minus a small slice that I left for Chris to eat for breakfast.  We can’t even blame Andrew’s bottomless stomach this time, because he wasn’t there.  A week later I am still dreaming of this cake.

I was proud of what Chris and I put together for this meal.  We work as a great team in the kitchen, which has not always been the case.  What works best for us is to each have a part of the meal that we make ourselves with input and some assistance from each other rather than trying to cook everything together.  We even managed to impress our new friend.  There is no better introduction than getting to know someone over food.  Expectations were set high for this meal, and I think we passed with flying colors.