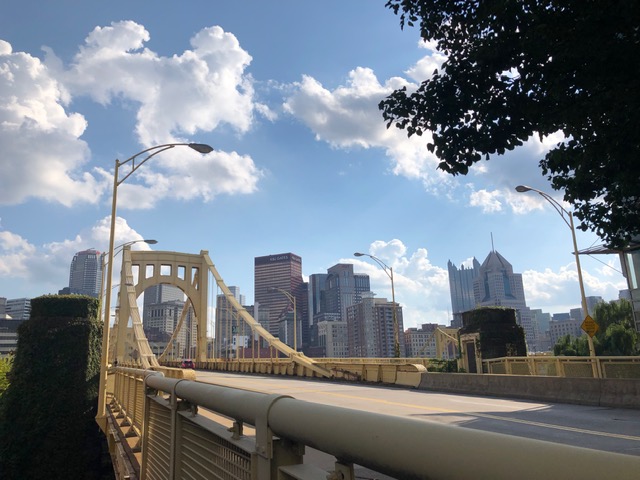 Pierogi are filled dumplings present in various Eastern European cuisines. They are traditionally boiled and may be pan-fried before serving (aka the best way to eat pierogi). The filling most known in the United States is potato and cheese, but other fillings could include sauerkraut and meat fillings. Pierogi have become very popular in American cuisine given the history of immigration from Eastern Europe. Pittsburgh is well-known for amazing pierogi due to the Polish population that settled there.

I absolutely adore pierogi. They are one of my favorite comfort foods. So, when I realized there was now a pierogi bar in Pittsburgh, I just had to go. It’s called Stuff’d Pierogi Bar and is located in the cultural district.

The menu is filled with a large variety of pierogi, from traditional to gourmet to funky fillings. You get six pierogi per order, your choice of boiled, pan-fried, or deep fried. We had seven people at lunch, and ended up with six different pierogi fillings. Six of the pierogi were done and served, but, they forgot to make mine, so they didn’t come until after we had demolished most of the other pierogi. Since we did want to share and try each others, I did get my good fill of pierogi while waiting. My friends were kind enough to feed this hangry girl.

Chris and Torsten both chose the potato and sauerkraut pierogi, one of the traditional fillings. These were topped with caramelized onions and more sauerkraut. Even though I typically don’t like sauerkraut, this dish was excellent. The sauerkraut and onions were a perfect pairing. 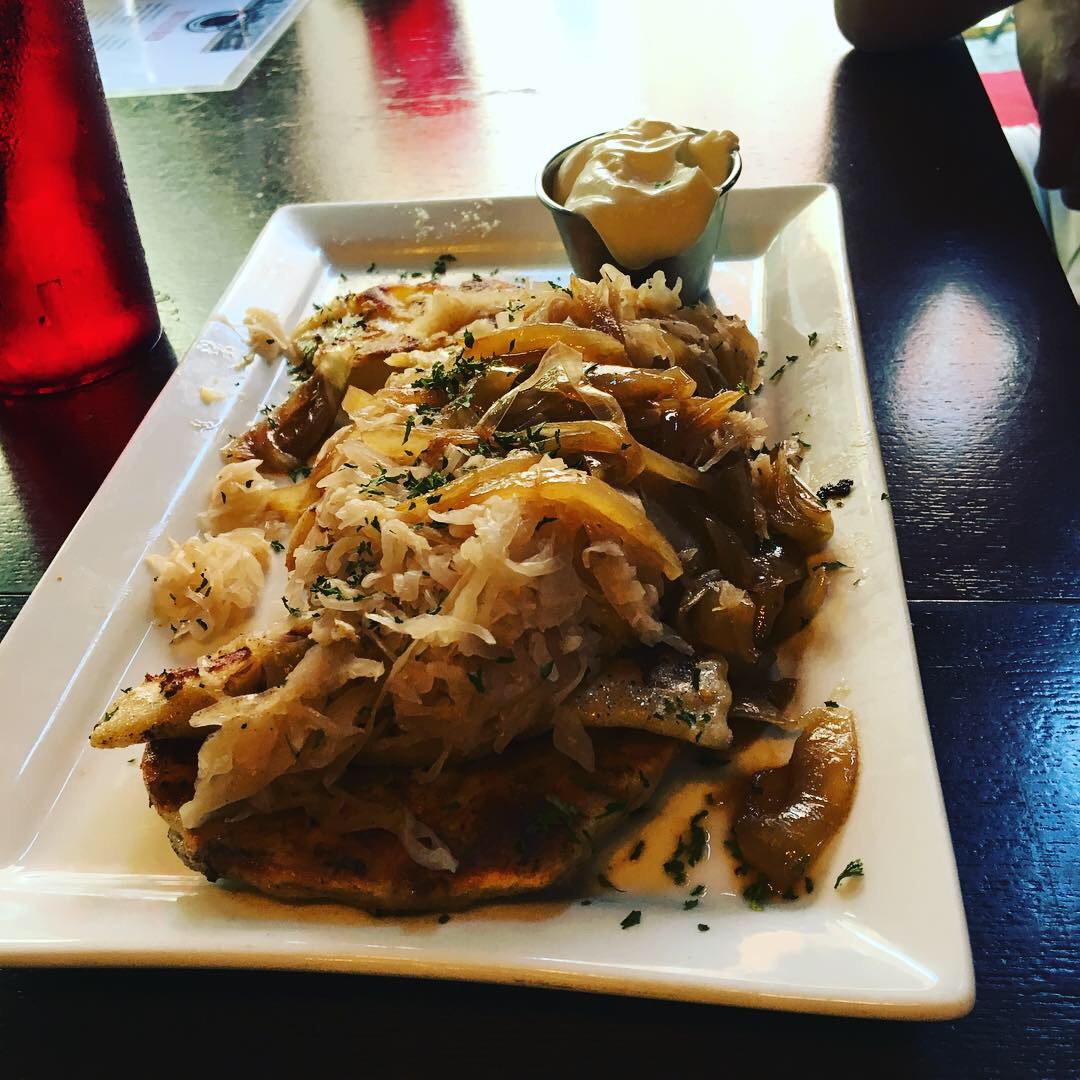 I ordered the potato and cheese, another traditional filling (and my all-time favorite). They were topped with caramelized onions and served with sour cream. Even though I had to wait for these to come, it was worth the wait. They filling was just right, and I could have eaten those caramelized onions on their own. 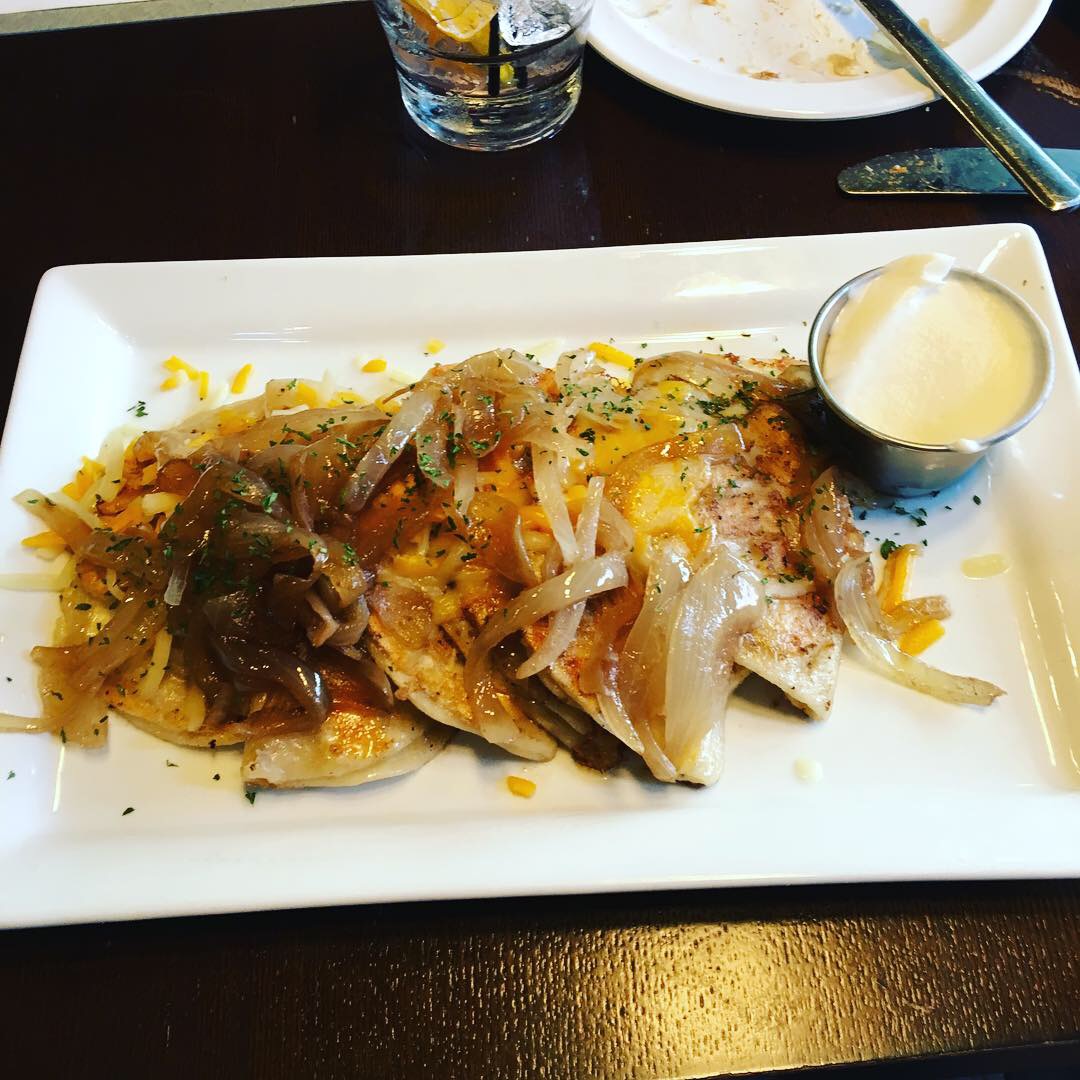 Andrew order the peach pulled pork pierogi. His pierogi were stuffed with pulled pork and then topped with more pulled pork and peach BBQ sauce.  They were also served with a side of cole slaw. It was a BBQ feast inside a pierogi.

Will got the Rueben pierogi. This pierogi were stuffed with corn beef and sauerkraut and topped with more sauerkraut, melted swiss, and drizzled with Stuff’d sauce. The dish was also served with marbled rye bread. They were almost too decadent to be called pierogi.

Anthony got the chicken parmesan pierogi, because he loves me and knew I wanted to try both that and that potato and cheese. I was sitting beside him and probably ate half of his dish while I was waiting for mine. These pierogi were stuffed with shredded chicken and parmesan cheese, topped with more shredded chicken, parmesan, melted mozzarella, and of course marinara sauce. These were heavenly. I just could not stop eating them. They combined two of my favorite foods in one delicious plate.

MJ ordered one of the seasonal specials. I am not sure about everything in them, but there was definitely butternut squash, spinach, and some kind of cheese and topped with spinach, zucchini, yellow squash, and more cheese. I think many of us agreed that these were the best pierogi on the table. This dish reminded more of a ravioli dish than pierogi.

All the pierogi we ordered were truly satisfying. This place was everything I wanted and so much more. It blew away my expectations. I certainly hope that this restaurant does well and sticks around. Even though you can get pierogi at a million places in Pittsburgh, they really don’t have something like this with all the funs spins on the traditional dish.

(I forgot to mention originally that the restaurant did take my pierogi off the bill since they forgot to make them. That was greatly appreciated).