I wanted to take a few moments to give props to my 2019 DC Restaurant Week experience. Restaurant Week is one of my favorite times of the year. It actually happens a few times a year in various forms, so there are plenty of opportunities to enjoy these great deals. Quite a number of popular restaurants in the area participate in Restaurant Week, which gives you a great opportunity to try new restaurants. You can get a three course lunch for $22 or a three course dinner for $35. Oftentimes, just an entree costs around that much as these restaurants.

Despite being an avid food lover and frequent restaurant patron, I only happen to stumble upon Restaurant Week every year. Chris and I already had plans to go to El Sapo Cuban Social for dinner on Friday.  It was only a day or two before when I realized not only that it was Restaurant Week, but that El Sapo was participating.

El Sapo is a relatively new restaurant for Silver Spring, though the owner should be familiar. Cuban-born Chef Raynold Mendizabal also owns Urban Butcher in Silver Spring, a popular place for steak and cured meats. El Sapo, on the other hand, plays tribute to Chef Mendizabal’s Cuban roots.

If you have never had the pleasure of eating Cuban food, I highly recommend you change that. Cuban food is full of life and flavor. There are so many dishes worth trying.  Thanks to Restaurant Week, we got a great sample of Cuban cuisine.

Before I dive into the menu, I want to give credit to how this restaurant was handling their incoming dinner rush. When we arrived around 7:30 pm, the restaurant was packed inside and out on the patio. With it being a Friday night and Restaurant Week, El Sapo was a popular destination in Silver Spring that evening.

I was concerned at first, as the line just to speak to the host was out the door. That was not looking too promising for quick service. Once we got closer to the counter, we realized that they were actually seating everyone nearly immediately after talking to the host. In fact, it was restaurant owner Chef Mendizabal who was acting as host that night. I was impressed to see him working so hard and also by how quickly they were seating people. In most restaurants in the area on a busy night like that, they would be taking down names for a long wait for a table. Chris and I had to wait about five minutes after we spoke to the host, but that was after several parties were immediately sat. We also got a complimentary mojito while we waited, which was part of the Restaurant Week deal. This was unique to El Sapo, as most restaurants do not offer free alcohol as part of the deal.

I was so excited for this meal because I had been wanting to try something on the menu besides the Cuban sandwich, which of course is a very tasty one. There is a good happy hour deal at the bar for Cuban sandwiches. This was our chance to get a wider taste of the menu. We were planning to have this meal regardless, but the fact that it was Restaurant Week meant we could try more items for a lower cost.

Here is a breakdown of what we ate. For our first course, I wanted the Cuban street food sampler. I am a sucker for good street food. This came with a beef empanada, a salted cod croquette, yuca frita, and pan lechon on garlic toast. These are some of my favorite Cuban treats. The empanada had a great crunchy exterior with a flavorful meaty filling. The croquette had a wonderful balance of seafood and creaminess. The yuca (my favorite of the four) had the perfect texture. These fried yuca are much softer on the inside (as if the yuca was mashed first) than many other fried yuca I have had. I could eat a basket of those. The pork toast was a a tasty treat and a preview of what was to come in our second course. 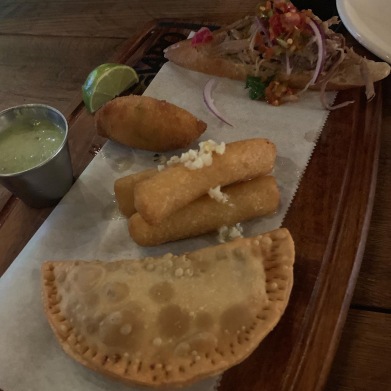 Chris wanted the manchego cheese with charred red peppers and pao quemao.  This crunchy toasted bread paired with the cheese and peppers was a delightful treat. There is not much in this world more pleasant than manchego cheese, or cheese in general. The cheese, peppers, and bread made a perfect bite before the main course.

For the main course, we chose the puerco asado and the ropa vieja. Both dishes were served to share with rice and tostones. I absolutely love tostones, so I went for one of those first. They were thick with just the right amount of crunch to them. I would have liked some more salt on them, but the garlic was alluring.

My favorite of the two dishes was the puerco asado. This pork was unbelievably juicy with a subtle hint of orange citrus. I was in awe on this pork. On the other hand, Chris loved the ropa vieja. I think he liked it because it had a fairly strong olive taste. That is why I didn’t like it as much as the pork, but I still did enjoy it. I guess that is proof that my tastes have expanded because I wouldn’t have eaten something that even touched an olive just a few years ago. 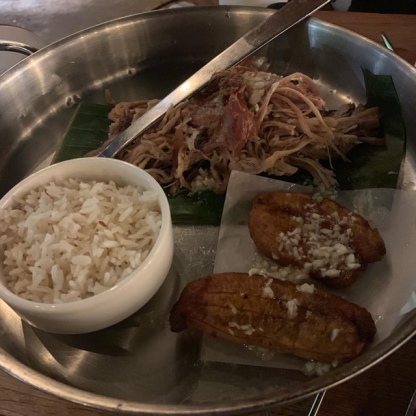 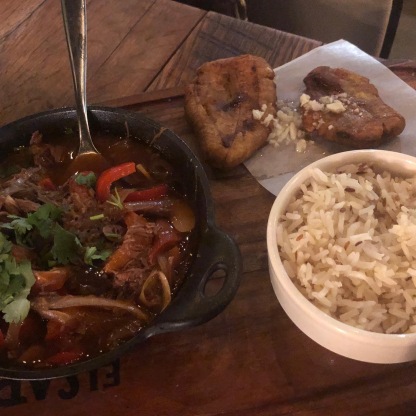 As for the third and final course aka dessert, we got churros and flan. Those are two of our favorites. The flan was good but not as creamy as some others I have tried. The churros were unique though. Normally, churros are soft on the inside but crunchy on the outside.  These churros didn’t have a crunch to them. They basically melted as soon as they touched your tongue, leading me to believe that the churro dough was more butter than anything else. While these were not the most traditional churros, they were so delicious. They were paired with a dreamy homemade whipped cream with a hint of lemon. I am used to eating churros dipped in chocolate, but the citrus cream was also a delight.

Well, we could barely walk out of the restaurant after this meal, as we were stuffed full of Cuban food. It was an amazing night. I think we chose wisely for this Restaurant Week. Oh, and as a bonus, here are some pictures of us at Jazz in the Garden before dinner, since apparently you are not a real DCer if you have never gone to Jazz in the Garden. 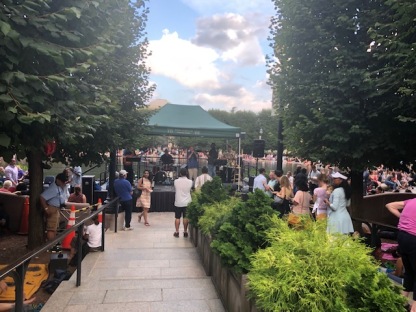