My first post of the year is about the last day of the year. I am now at home relaxing after another successful New Year’s Eve party thrown by the Hungry Trio.

New Year’s Eve has always been my favorite holiday. When I was younger, it was an excuse for me to stay up all night listening to music and building puzzles. Now, I absolutely love New Year’s because I get to bring out my culinary skills and craft a well-thought out menu to please our party guests. I can barely stay awake until midnight, but I make a mean NYE spread.

I take a lot of pride in the work I put into hosting parties. I spend a lot of time going through cookbooks, blogs, and online lists until I find the dishes that feel just right for the occasion. I have had a tendency to go overboard for New Year’s though. It’s the inner Italian grandmother in me that feels like we are going to run out of food.

This year I really wanted to outdo myself now that I have my blog. I felt like I had something to prove. Instead of overdoing things, I decided to class things up by trying to make a more concise and directed menu. I focused on small bites that I knew would absolutely knock people’s socks off. I thought the best way to improve from last year would be to find ways to be more efficient in my party planning and food preparation. I always try to do so much that I spend the first couple hours of the party scurrying in the kitchen to finish things up.

I did zero preparation for this party before yesterday morning. This is seriously the least stressed I’ve ever been before a NYE party. I had almost everything cooked by the time the party was supposed to start. I was taking the last dish out of the oven as the first wave of guests were arriving. It was all perfectly timed. I even got to socialize and enjoy the party. I allowed myself to disengage from the kitchen and engage with our friends.

The second dip was cannoli dip. I haven’t had this in years, but I have fond memories of eating this dip at Chris’s parents’ house for New Year’s Eve during college. I had Chris get the recipe from his mom, and it was just as good as I remembered.  These are two dips that are easy to whip together. They are both cream cheese based and have a limited number of ingredients.

I then planned for a few small bites. My first was a chorizo and Manchego crostini. We love our cheese and charcuterie boards at a party. This crostini brought those two elements together in perfect harmony. There were only four ingredients: crostini, apricot preserves, Manchego cheese, and cured chorizo. It is such a simple dish, but it is an excellent combination of flavors.

Another easy bite I made was tomato and bacon phyllo cups. I made a mixture of cream cheese, shredded Swiss cheese, Ro-Tel tomatoes, and crispy bacon crumbles. I filled some phyllo cups from the freezer section with this mixture and popped them in the oven at 350 for 20 minutes.  Both of these small bites flew off the table.

The next two small bites were a contrast of spicy and sweet. I made buffalo cauliflower “wings.”  It had a simple batter, and they were baked instead of fried. At the end of baking them, I simply tossed these with buffalo sauce and arranged them in a platter with a border of celery sticks and a side of ranch.

To balance out the spiciness, I made frozen prosecco grapesicles. I soaked some grapes in prosecco and vodka and then froze them for several hours. It made for a cute and fun party treat.  I could pop these grapes in my mouth all night long.

Finally, I made some pepperoni bread. This was one of the more time consuming things I made because I made my own bread. Many people I know will make pepperoni bread or rolls from frozen bread dough.  I have definitely done that before, and it works great.  I just really wanted to test my new KitchenAid mixer. 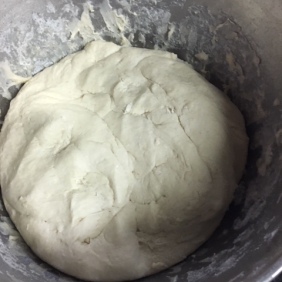 I wish I had bought more pepperoni and cheese.  The filling was a little lacking, but the bread was still so good.  I served it with a side of heated pizza sauce I had leftover in the fridge from making pizza. Next time, I will buy double the pepperoni and cheese. The bread still disappeared before the end of the night. 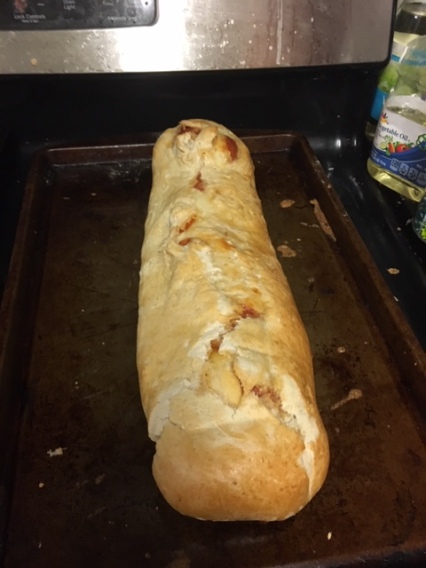 Everything I made turned out so well.  There was not an unhappy stomach in the house. It was the perfect end to the year. I felt validated in my decision to move towards the food industry and do what I love.

I hope everyone’s New Year’s Eve was fantastic.  I am sending out good vibes for 2019. It is going to be a big year for me. I have new blog projects, grad school applications, and some big life decisions. I also am going to see both Kelly Clarkson and the Backstreet Boys this year, which is making me fangirl so much already. I have a feeling this is finally going to be a good year for me.