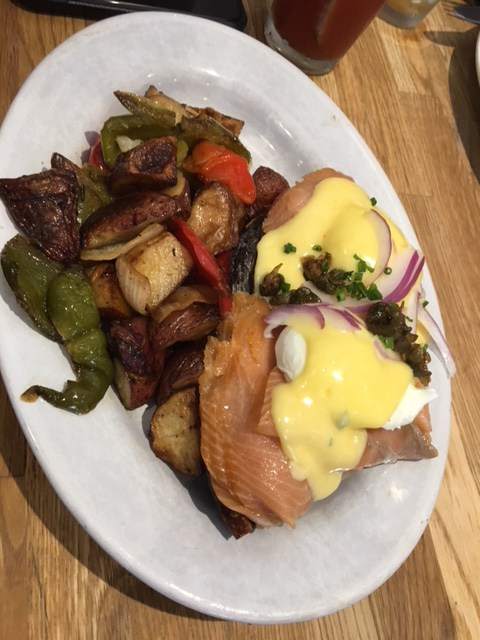 The mini Philadelphia food saga continues.  In that journey we have now made it to Saturday morning where the Hungry Trio tackled brunch in Philadelphia with Andrew’s parents (Sue and Steve).  His parents live about an hour and a half from Philly, and they met us in the city for brunch.

Chris, Andrew, and I were coming from Reading Terminal Market where we had been walking around after getting our coffee and donut fix.  We had a gorgeous walk over there with some fantastic views.  It was a gorgeous morning.

We had some time to spare before meeting Andrew’s parents, so we took a little detour to see more of the city.  Andrew guided me into the Kimmel Center, which is Philadelphia’s version of the Kennedy Center.  I still think the Kennedy Center is a pretty building to look at, especially lit up at night.  However, the Kimmel Center takes theaters to another level.  I would love to go see a show here.  The design of this building is exquisite.  I particularly was intrigued by the high glass ceiling design.  In daylight, it was a gorgeous scene.  I would be interested in seeing how it looks at night.

Alright, so brunch… We got a recommendation to go to Green Eggs Cafe but were told to be prepared for a wait.  That certainly was the case.  When we arrived, there was a line of people outside waiting to get a table.  Fortunately, the weather was great so it wasn’t terrible having to wait outside, though I did end up getting slightly sunburnt.  I didn’t actually realize this until I got home that night. 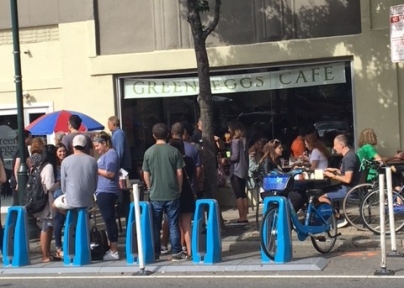 While we were waiting for our party to get called, I was watching the waiters bring out plates to people sitting at the patio tables.  The food they were bringing out looked beautiful, and I felt so excited to take a look at his menu.  I had not checked out the menu online like I normally do.  I was too tired when we got home the night before, and I wanted to be surprised for once.

The ambiance of the cafe was cute.  There were some rather artistic food drawings on the specials board.  For the second time that weekend, I looked up to see the Food Network playing, so I was beginning to think that Philadelphia understood me on a spiritual level.  It was 11:00 am, so “The Kitchen” was playing.  They pulled out their first fall episode, which was convenient, given that it was the first day of fall.  I love watching “The Kitchen” on Saturday mornings as a break from the constant drive of work.  It is light hearted but informative.  I have made quite a few recipes I have seen on the show for this blog, one of which will be featured in a post later this week.

One of the complaints we all had about the restaurant was how loud it was inside.  There was absolutely nothing to absorb sound.  It was hard to hear anything.  We could barely hear each other when we were right beside/across from each other.  That aspect detracted a bit from the dining experience, because you want to be able to hold conversation with your fellow diners.

As for the food, I was impressed by the menu.  There were several things on the menu I could have been happy to eat.  I decided to order the cajun shrimp and grits topped with poached eggs.  It was served with creole sauce.  I truly want to replicate that sauce.  I could tell that it had the holy trinity of Cajun cooking (onion, bell pepper, and celery) but I wish I knew what else was in it.  I’ll have to do some recipe research and see if I find something I like. 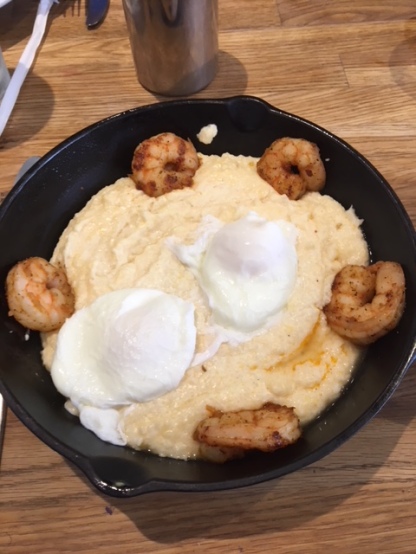 The shrimp and grits were good, but I’d say the shrimp to grit ratio was off.  There was just a lot of grits.  I didn’t seem to have a problem finishing them.  The grits were perfectly creamy and well-seasoned.  I just wish this dish was more balanced.  I would have loved to have a much smaller serving of grits and have a side of fruit or vegetables, maybe some blackened carrots, for example.

Chris ordered the Lox Benedict.  It was served with potatoes.  He seemed to really enjoy it, which is not surprising.  I know that Chris really loves his lox.  I took a bite or two of his meal, and I was pleased.  That was one of the smoothest, most velvety Hollandaise sauces I have ever tasted.  I could just lick that sauce off the spoon.  So the theme so far is that this restaurant makes good sauces.

Steve ordered an omelette, which came with a side of potatoes and toast.  He noted that the toast was not warm enough to melt the butter, and we definitely observed that.  I guess that can be hard to accomplish when food sits for a bit before being served all together, but maybe there is a way to save the toast until last.

The other issue we noticed was that his dish was served with a ton of potatoes, way more than the average person would normally eat.  Seriously, look again at all those potatoes!  I think he was given more potatoes than Chris, but even if this isn’t the standard serving, it is a bit overboard.  Half of the plate was potatoes.  I was disappointed by the portion size of some of these meals.  It feels wasteful to be serving so much food when a lot of it will not be touched.  When doing some research for this post, however, I learned that the restaurant composts the leftover food when they clear the plates.  That made me feel better and gave them an extra point in my book.

Sue ordered the crab cake salad, which was served with crostini arranged around the plate.  It was an artistic and tasty looking dish.  Andrew’s mom asked me what one of the lettuce types were in her salad, and I couldn’t answer.  I knew I had seen it before with all of the episodes of Chopped I have seen, but I couldn’t remember the name.  If you are reading this, I looked it up in the car on the way home.  It is frisee.  Now that I have schooled myself on lettuce, I will probably never forget frisee again.  I actually had some frisee in the salad I was eating while typing this up tonight. 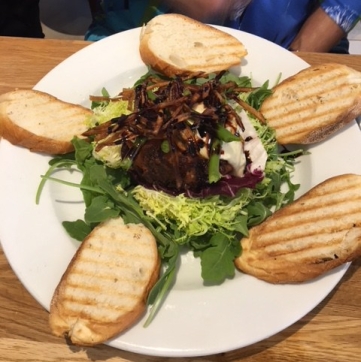 Finally, Andrew ordered the “Kitchen Sink.”  This dish was served in a skillet (like mine) and was described as “three eggs scrambled with sausage crumbles, Gruyere cheese, potatoes, peppers & onions, topped with homemade jumbo biscuit and country style pork sausage gravy.”  So yes, let’s just throw in the kitchen sink while we are at it.  I also got a good taste of that biscuit and gravy, and I must approve.  It was a delicious sausage gravy.  I decided not to order that dish because I had just made biscuits and gravy the prior weekend.  I think it was well enjoyed by Andrew though.

After brunch, we were ready to go explore the city some more, and we headed off to the Philadelphia Museum of Art.  To Andrew’s friend Andrea, thanks for the awesome recommendation.  Despite the noise, I enjoyed this brunch experience.  The food was good, and they offer some creative spins to typical brunch dishes.  If you are ever in Philadelphia and want a good breakfast/brunch spot, I would go visit this restaurant.  Just keep in mind that they are a cash only joint.