This post is dedicated to the one and only Guy Fieri. While I was in Philly, I convinced Chris to go a restaurant Fieri has featured in his Food Network show, Diners, Drive-Ins, and Dives (aka Triple D). Chris is not a fan Fieri, so convincing him to go to this restaurant took some work.

I am a huge Guy Fieri fan. I understand why some people find him to be a lot: the clothes, the hair, the sunglasses, the corny catch phrases. He is a loud presence. However, he is very knowledgable and clearly loves food. I appreciate how he really seems to care about the restaurants he visits. He is constantly working to support the restaurant industry, and for that he has earned my admiration.

I looked through the list of Triple D locations and found the one I most wanted to try in Philly, Sidecar Bar & Grille. Chris excitedly approved of the menu, so he was willing to overlook that Guy Fieri had been there.

At the restaurant, we ended up in the upstairs dining section, which was incredibly dark. It was almost like eating dinner inside a movie theater. I guess I do understand why it was so dark, since they have a projection screen playing TV against the wall. What were they playing on the screen? Of course it was Divers, Drive-Ins, and Dives, which airs all night on Fridays on the Food Network. Oh how I wish you could have seen Chris’ face when he realized that Fieri was accompanying us to dinner. Well, actually you can because I took a picture of it. 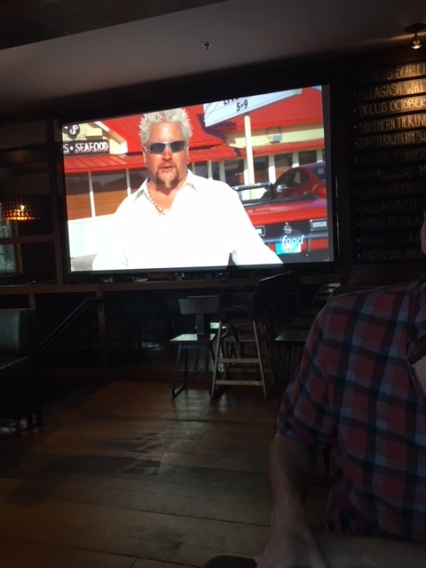 As for our dining experience, I would say overall it was pretty good. We started out with a couple cocktails. The alcohol prices here shocked us. We are not used to seeing drinks so cheap. I don’t think there is a place in DC where you can find a $7 regular priced cocktail. 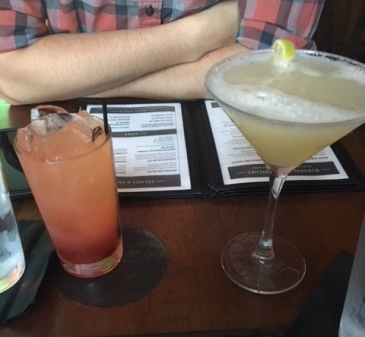 We decided to start the meal with cauliflower wings. You can get them with any of their wing sauces, and we chose piri piri. I would like to say I didn’t think it was too spicy, but I ended up in tears while eating them. The flavor was lovely even if a tad too spicy for me.

We also both chose a burger for our dinner. Chris got the breakfast burger, which had pork roll and an egg, while I ordered the black bean burger. The flavors were good, and the sauce was great. However, the burger was too mushy. They didn’t do a very good job at using something to bind together the black beans into an actual patty.

This was a good dinner accompanied by great drinks. It looks like this restaurant is doing well since Guy Fieri visited in 2013. I would be open to going back another time, even if it just to enjoy more of those cheap cocktails.