Chef José Andrés is a bit of a local icon here in DC. He is a renowned Spanish chef who is often accredited for popularizing the Spanish tapas-style (small plates) dining in the United States. He has a number of restaurants throughout the country (find the full list here), but the highest concentration is in the DMV, in particular in downtown DC. If you walk in a couple block radius near China Town and Penn Quarter, you would pass by four of his restaurants: Jaleo DC, China Chilcano, Oyamel, and Zaytinya. I call it José Andrés Quarter.

Prior to this past weekend, I had been to each of those restaurants besides Oyamel. I felt it was time to change that. I have such great admiration for Chef Andrés. He is a reputable culinary mind, but he is also a humanitarian. (We are also both residents of Bethesda, MD.) I have been reading José’s book about how his non-profit went to Puerto Rico to help feed the island after Hurricane Maria devastated them in 2017. From what I gather, José is a chef who is incredibly passionate about food and as equally passionate for using resources and celebrity to help people. I feel very comfortable giving business to Chef Andrés.

I used my planned dinner-date with my friend, Anthony, as an opportunity to cross another José Andrés restaurant off my list. Oyamel features Mexican cuisine in the small plates style of dining.  The name “Oyamel” comes from the name of the tree where monarch butterflies seek refuge during their annual migration. When we went on Friday, they were partnering with the World Wildlife Fund’s campaign to help save these butterflies’ food systems. There is no doubt in my mind that Chef José Andrés lives what he speaks when it comes to his causes.

This dining experience took place on Friday at the end of Happy Hour. The restaurant was clearly busy (as would be expected for a Friday evening), but we were still able to get a table in just about 10 minutes. I loved the decor of the restaurant. It felt modern and hip, down to the butterflies hanging from the ceiling. I liked seeing various food stations set up in the middle of the restaurant (such as the guacamole station and the ceviche station).

While we were looking over the menu, our waitress brought us our watermelon cocktails as well as some chips and salsa. It was evident that both the chips and salsa were house-made. The salsa had that perfect smokiness that I love to in a salsa. The chips are thin and perfectly crispy and then coated with some sort of spiced/flavored salt. I can say confidently that this was the best combination of chips and salsa I have ever eaten.

Since I was this impressed with the complimentary food, I couldn’t wait to try some actual menu items. Small plates restaurants are great for getting a full sense of a restaurant’s food in one sitting. We certainly took advantage of this, trying a wide variety of items.

We started with a ceviche and a vegetable. Our waitress highly recommended the ahi tuna ceviche, and it was a great recommendation. The Maggi-lime marinade was bold and flavorful but complimented the fish and avocado very well. I would absolutely eat this ceviche again, though each ceviche on the menu looks worthy of a try.

The vegetable we chose was the grilled chayotes. I had never had chayote squash before; I think I’ve only ever seen it as a basket ingredient on “Chopped” on the Food Network. The squash itself does not seem to have much flavor and is more dense than most other squash. However, it takes on the other flavors of the dish, in this case the tomato-arbol chile salsa. 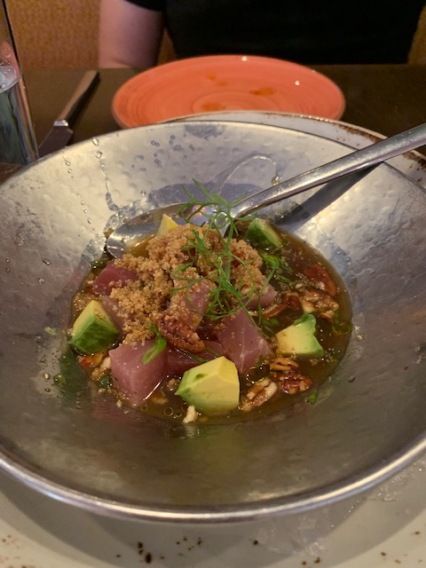 After the initial course, we moved onto the tamal de mole poblano at Anthony’s suggestion. He made a great recommendation, as I was enamored by this dish. My reaction to this tamal can only be adequately represented by a GIF.

In all seriousness, it was such a divine dish. The mole was up there with the best I have ever had, maybe even the best. The tamal, the chicken, the sauce…all together they combined to an absolute perfect bite.

Of course, no meal at a Mexican restaurant would be complete without a couple tacos. We both chose the same two tacos: the lengua guisada and the cabrito pastor. I chose these tacos because they aren’t something you could just get anywhere. Beef tongue and goat tacos are not common finds in the DC dining scene. I appreciated getting to try some of these more traditional taco fillings. This was actually my first time eating tongue, and it was quite delightful. 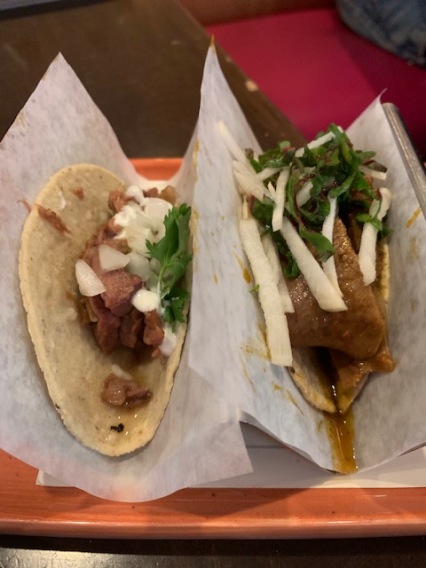 I was completely impressed and satisfied with this meal. I can’t say that I was surprised, as I have come to expect this from a José Andrés restaurant, so it is saying something that a couple of the dishes blew me away. I would put this on a list of restaurants I’d go to again when I come back to visit DC.

*This post reflect my honest views. I did not receive any compensation or other incentives to post this review.