I found myself in the heart of Cajun country.  I have long had an admiration for “Cajun” food, or at least the versions that have been presented to me in the North.  When I knew I was coming to Louisiana, I was excited to get my hands (and stomach) on some Cajun specialties.  In the few days I was in Louisiana, I feel I accomplished this.

I can’t believe it has taken me this long to visit Louisiana given that I have had family there most of my life.  Now that I have gotten a taste of what this beautiful state has to offer, I don’t think it will be the last time I visit, especially because I felt I just touched the surface of discovering the wonders of Cajun cuisine.

There was no way I was going to leave Louisiana without trying a real, authentic gumbo.  I sometimes get “gumbo” in the fresh soup section of the grocery store, because I love the flavors.  I fully knew this was not real gumbo though, so I couldn’t wait to get some while I was here.

I got to enjoy my aunt’s homemade chicken and sausage gumbo at her home in Lafayette.  I would have loved to try some seafood gumbo, but I just don’t want to risk getting sick from eating shrimp on vacation.  Those darn food allergies are trying to spoil all the fun.  This is why I specifically avoided eating crawfish (another Louisiana specialty).

My aunt’s gumbo was out of this world, served over rice with some French bread for dipping.  It was warm and wholesome.  The flavors and spices of this dish were divine.  I could tell how much love and care goes into making a good gumbo.

My aunt even said that gumbo is best a few days after it’s made.  We ate some gumbo she made before and had frozen.  My understanding is the longer and more times you simmer a gumbo, the better it tastes.  This  gumbo must have gone through enough simmering, because the depth of flavors in this dish was outstanding.  This was hands down the best meal I ate in Louisiana.

The same night I ate my aunt’s gumbo, I got to try some homemade jambalaya.  I was so confused as to what the difference was between gumbo and jambalaya.  In versions I have had in restaurants in the North, they both seemed to be a stew-like substance with variations of shrimp/seafood or chicken/andouille sausage served over rice.

What I learned, however, is that gumbo is more of a soup served over rice and jambalaya is more like a rice dish with meat and spices mixed in with it.  I was told it was more similar to “dirty rice” (another rice dish with meat).  I’d also compare it to the Cajun version of “arroz con pollo.” 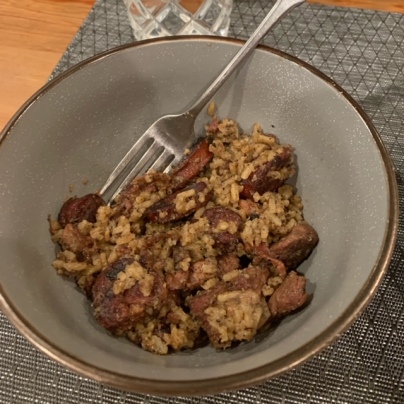 My cousin made jambalaya with pork and andouille sausage.  The flavor profile seemed different than the gumbo, while still being very Cajun.  It had more of a smoked flavor.  I thought it was delicious.  I enjoyed eating this alongside the gumbo so I could compare the two.  I understand the difference now and can appreciate how each dish has an importance in Cajun cuisine.

This next dish is something I had never heard of until I arrived in New Orleans.  I had trouble remember how to say this dish, because it was pronounced to me quite different than it looks (boo-dan).  I was confused by the “a” sound because there is no actual “a” in the word.   After I remembered how to say it, the next struggle was understanding what it is.

I read somewhere that to call boudin a sausage would not do it justice, and I would agree.  It is encased in sausage casing, and it a sausage-like meat.  However, it is so much more than that.  Boudin is made with a mixture of pork, rice, onions, peppers, and spices stuffed into sausage casing.  It seems there are various ways to cook it, but the version I tried was simmered in hot water. 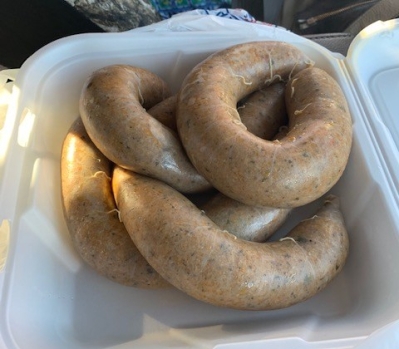 Boudin is one of the more visually unattractive foods I have eaten.  It is not an aesthetically pleasing sight, and it did not improve when we cut it open.  I think it actually looked worse.  The insides look like mush.

The good news is that while this food looks a bit awful, it tastes amazing.  I almost couldn’t explain what it tastes like because it was so out of my element.  It was packed with flavor though.

I found boudin to be delicious and very filling.  We picked up a few links on our way from Lafayette back to New Orleans and ate it on the car ride (or pickup truck ride rather).  My aunt described how to eat it “as if you are eating a push pop.”  Basically, you hold the link of boudin and push the filling out of the top of casing and eat it.  It was a little bit of a messy experience for being in a vehicle, but I can’t think of a more Louisiana thing to do while taking the back roads across Cajun country and listening to country music.

I heard about these chips, Zapp’s, from my family members.  They are an UTZ product that are made and packaged in Louisiana.  I suppose that is why I had never heard of them before.

These chips come in a variety of flavors, including your standard potato chip to sour cream and creole onion.  The flavor I tried was called “spicy cajun crawtator.”  If that doesn’t sound like Louisiana, I don’t know what does. 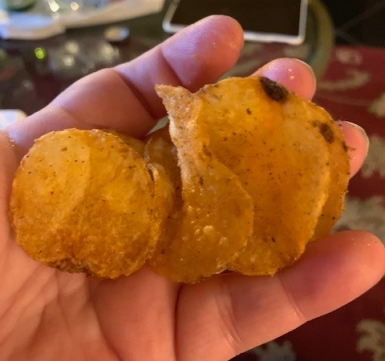 Being kettle chips, Zapp’s have a nice crunch to them.  I don’t eat chips very often, but I tend to prefer something like a kettle chip.  I found the flavor to be interesting.  They were a little spicy but not too much heat.  I quite enjoyed having a handful of these chips as a snack in New Orleans after a long day of sight-seeing.  I wouldn’t want these as an everyday snack, but I did like them.

So, these are the more traditional “Cajun” foods I ate while in Louisiana.  I did have some other Louisiana specialties like po boys and cochon de lait, which are incorporated into a couple other posts.  I felt more than satisfied with my Cajun food experience.  I can’t wait to go back and try even more.