My stomach is full right now, and my heart is happy.  I met up with my friend, Anthony, for dinner at Cuba Libre Restaurant & Rum Bar. Our original plan was to meet at Habana Village in Adams-Morgan. However, they are not open on Tuesdays. I was in the mood for Cuban food, so I chose a classic spot in DC, Cuba Libre.

I have been to Cuba Libre a few times for drinks and appetizers but never for a full meal. Cuba Libre has a cute atmosphere, even if it is a bit cheesy.  The decor is modeled to look like the streets of Havana with balconies and flowered walls.  It is a decently large space, and they managed to squeeze in multiple fake balconies.

I can’t go to Cuba Libre without getting some sort of mojito. Mojitos make me think of sipping drinks on the dock in Florida with my friends. Today was cold and rainy. A mojito helped me invoke the feeling of summer, especially when it involves grilled pineapple puree. I got the grilled pineapple mojito, and Anthony got the sangria blanco. I really enjoyed my pineapple mojito. It was sweet with just a touch of mint. 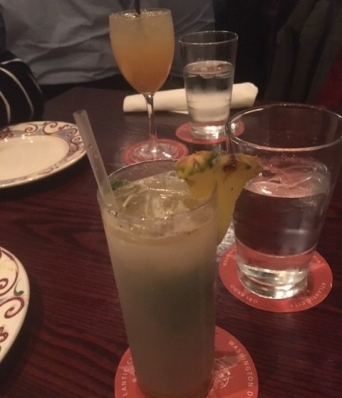 Cuba Libre has such a delicious menu that it can be hard to decide what to order. I certainly was having a difficult time making a choice. We did did manage to settle on an appetizer, the tropical chips and trio of dips. The rhyming name might seem cliche, but this appetizer was not a laughing matter. Plantain and malanga chips were served with salsa, black bean hummus, and roasted cauliflower with curried onion hummus.

I had never had malanga before, but it is similar to taro root. Malanga made a delicious chip, thick and crunchy.  The plantain chips were also delicious, but I expected them to be. I fell in love with plantain chips while I was studying abroad in Ecuador. You could buy a bag of them on the street for a quarter. I can devour plantain chips like nobody’s business. I far prefer them to potato chips.

I know I am not supposed to eat hummus anymore, but I just couldn’t resist these handcrafted dips. The black bean hummus was rich and satisfying. The cauliflower hummus was unique. I would not have thought to make hummus like this, but it was a nice treat. I especially like the curried onions.

As for our dinners, Anthony ordered the churrasco a la cubana. This dish consists of Black Angus grilled skirt steak, parsley, lemon, and onion sauce, roasted garlic boniato-potato mash, watercress salad, red wine vinaigrette. I personally think he made a good choice. This dish bright and flavorful. I can only imagine how juicy this steak was. 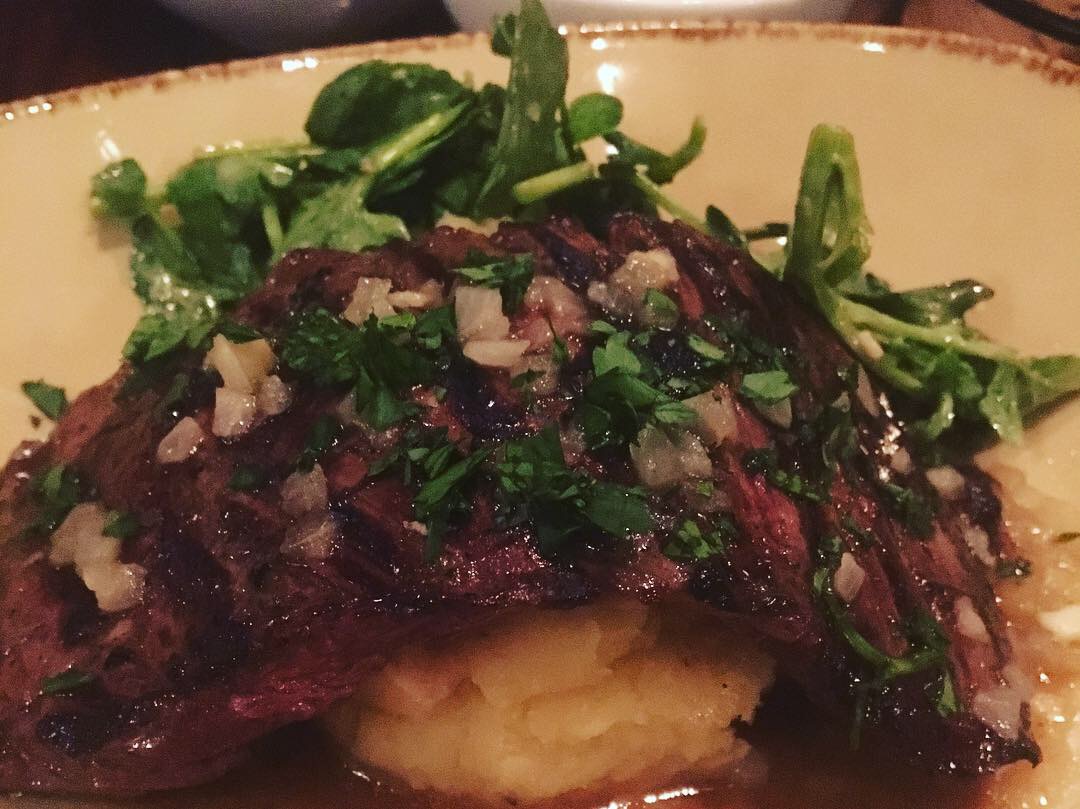 I ordered the vacio steak argentino. This dish was Salmuera marinated-grilled all-natural bavette steak, Moros y Cristianos rice pilaf, Hawaiian tostones, pickled okra, parsley chimichurri. I chose this dish because it had some of my favorite Cuban foods. I remember getting this black bean and rice pilaf in Miami a couple years ago, and it was so good. I also was introduced to tostones during that same meal. Now, I just can’t get enough of tostones.

I liked the crunch of the tostones, but they were a bit bland. Some kosher salt could have gone a long way, but ultimately these tostones would have been great with some mojo sauce. The rice pilaf was delicious. Little chunks of bacon brought bursts of flavor to the rice. I could eat that all night long. I also want to give credit to this steak. This may not have been a Cuban style steak, as it took its inspiration from Argentina. Steak with chimichurri is one of the best things to come out of Argentina. They are an undeniable pair. This steak was tender and juicy, and the chimichurri awoke my taste buds. Despite the slight disappointment with the tostones, this meal was rather pleasing and satisfied my craving for Cuban food.

I have long had high regard for Cuba Libre.  I am happy I finally got to have a proper meal there.